The cutest iPod player you’ll ever see (and hear) 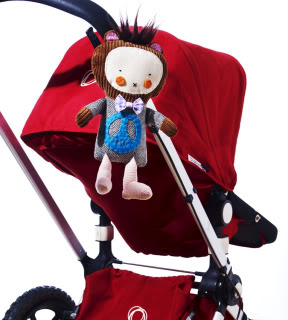 Before I had kids, I was one of those people with headphones firmly planted in my ears during my commute or even when I was just picking up toothpaste at the drug store. Now that I have two little ones, I need to be on alert at all times, meaning no headphones. But to my delight, I discovered an awesome–and adorable–way to bring music along for the stroller ride.

Woon iDolls are the brainchild of a mom of three who was tired of music-less stroller rides. Using her eye for design (she used to work in the fashion magazine biz), she created two crazy cute dolls, Pax and Lulu, that discreetly hide speakers and an iPod plug inside a nifty velcro pocket.

During my first test run, I loaded up the iPod with my three year-old’s faves, including Young Folks by Peter Bjorn and John (you know, the catchy tune with the whistling). We got plenty of smiles and stares as we strolled the sidewalks with Pax attached to the stroller. I have to say, it did turn a regular old stroller ride into a fun dance party.

Of course I don’t want to be rude either–it might be best to limit the music playing when you’re not going to annoy everyone around you.

I love that the Woon iDoll easily attached to diaper bags, cribs or a high chair, thanks to a strip of velcro. I’m hoping that some Nina Simone during wind-down time in the crib will help my younger son, who is a fussy four month-old, just chill out and relax. And all things being equal, I’d imagine a little audio time for a baby is better than a little screen time. -Melissa

Woon iDolls portable mp3 player speakers are $49.99 each and can be found online at Magic Beans and Chloe in Style.