Kids’ music download of the week: These Are My Friends 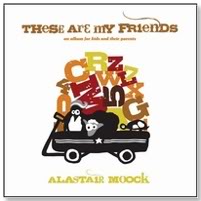 My son has adopted everything from a mixing spoon to a couple of russet potatoes as his friends, so I know a thing or two about kids and the oddball company they keep. That’s why I love this seriously catchy song about friendship from Massachusetts musician Alastair Moock.

The lead song off his album with the same name, These Are My Friends gallops along telling of a menagerie of inanimate pals that Alastair has amassed, with a chorus that reminds us, “they may look like odds and ends to you. . .but these are my friends.” You mean I really can’t throw that away? Sigh.

With a gravelly voice that has a smile just beneath the surface, I suspect he gets as many grown ups and kids singing along at his shows. I think I’ll just sing along and ignore what new “friends” I find my son clinging to as he sleeps.

Download Alastair Moock’s These Are My Friends at our affiliate Amazon.