Throw your hands up in the air for Just Dance 3 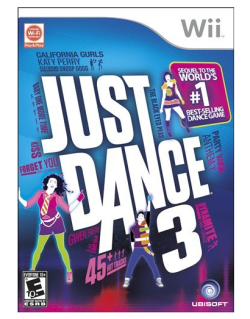 I’m hardly the video gaming type, but after I was introduced to Ubisoft’s Just Dance 2 last year, I’ve been known to pop it in and shake my butt to Ke$ha even when no one’s around.

So when I heard that they launched Just Dance 3, well, you can bet I was anxious to check out what’s new. And from what I can see, it does not disappoint!

If you’re not familiar with Just Dance (what?), it’s a ridiculously fun dance-off type game that has participants mirroring dance moves on a screen, with scoring based on how well you follow along. Now, this entertaining game is not just for Wii but also for XBox Kinect owners. Whoo!

If you’re like me and have exhausted your song options on the first two games, then you’ll be excited to see more than 40 new songs from all sorts of music genres, like Cee Lo Green’s “Forget You” (yes, the cleaned-up version), Taio Cruz’s “Dynamite,” and even “Venus” by Bananarama, which was a great cover before it was ruined by a razor commercial.

The best part is that Ubisoft’s Just Dance 3 isn’t just a fabulous gift and embarrassing party game (ha!). It’s also one heckuva workout. And a fun one at that. -Kristen

You can purchase Just Dance 3 at our affiliate Amazon.com.