The VTech Innotab Learning Tablet. You know. For kids. 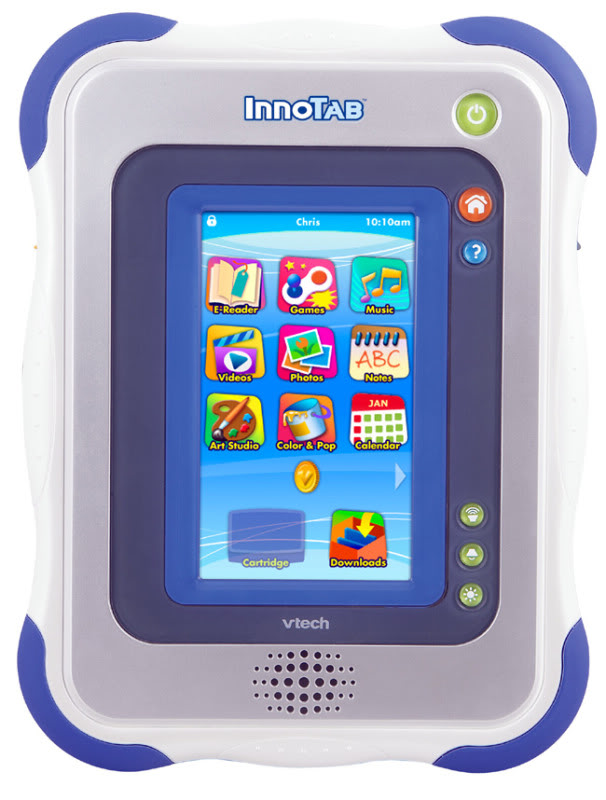 Every parent with an iPad (and that’s a lot of us) has at some point asked the same question–something along the lines of man, why can’t they make one that’s just for kids that doesn’t cost a fortune and isn’t destined to be broken in the four seconds that I turn my back? I think that the answer to your questions has just come in the form of the truly astounding InnoTab Learning Tablet from VTech.

We have spent the last week playing with one and I have to say, I was expecting a toy that looks like a tablet. That’s not the case at all.

At just under $80, you’ll be blown away by how much this thing can do and just how well it does it.

The 5-inch color touch screen has very much got the look and feel of an iPad interface, right down to the fact that you can actually touch an icon gently, and not have to jam your finger into the screen four-hundred times (ahemkidscameracough). The tablet also lets you tap, flick, drag, and even shake or rotate the tablet for certain functions, which kids always adore.

The whole system is rather intuitive and user-friendly–at least once I figured out how to turn down the sound, which admittedly had me stumped (you have to press the volume button multiple times). My 4 year-old can operate it no problem, and my 6 year-old could even manage all the settings and set-up by herself.

I’d imagine if you get things going, a younger toddler sibling would be fine with several of the apps. But the reco is for ages 4-9 and I’d say that’s about right.

Speaking of apps, the InnoTab comes preloaded with quite a few. You’ll get an MP3 player, Video Player, a few nifty coloring apps (my favorites), a calendar and photo book, a “friends list” (mainly an address book), a calculator, interactive globe, and of course a couple of games which happen to be well-executed. There’s also a library that comes preloaded with one mercifully unlicensed e-book, and while isn’t exactly going to give ibooks a run for their money, it’s a nice component to have included.

One minor challenge I have–I wish there were the ability to add a second (or third) child’s profile to the system. Right now, Daughter #1 gets her name up there, and Daughter #2 has to resign herself to “Guest.” No doubt that’s a function of memory capacity.

As far as what’s not included, you definitely want to make sure you have 4 AA batteries to get started (if not more, ahem) plus an SD Card for sure–my kids were disappointed that they couldn’t save their artwork without it. A headphone might be a handy addition as well.

And to expand the functionality, the idea is that you can connect to your own PC to purchase more apps, games or ebooks; there are a bunch of VTech Innotab software cartridges sorted by age, that are so far limited to the usual licensees. Think Cars 2, Dora and Disney Princesses. (Though I do have to say I’m intrigued by the Penguins of Madagascar.)

You could say that once you add in a lot of apps and cartridges, the InnoTab could end up costing more than buying an actual used iPad. But honestly, this thing is rugged, durable and built for kids. (Remember, even a $99 used iPad is expensive when it becomes a broken $99 iPad.) It doesn’t have to be your kids’ only access to technology either; you’ve still got the web and your other devices at your disposal.

Now the big question of course is how much of this is actually about “learning” and how much of it is about playing. I’d say, it’s up to you and your kid and how you use it.

What I do think a parent can’t overlook however is that in part what the InnoTab teaches is the beginnings of tech proficiency. Forget the Cars 2 games; I think it’s cool that kids can maintain their own digital photo albums, set wallpaper, and even mark dates and type notes to themselves on their own calendar.

I’m hoping that as the software options expand, so will our kids’ opportunities for learning on this very, very cool device. Bravo, VTech. –Liz

Find the InnoTab Learning Tablet from VTech online at VTech or retailers like our affiliate VTech Amazon. Thanks to VTech for providing one for review.