Should car cell phone use be (almost) totally banned? 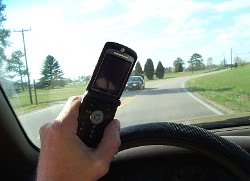 As a mom with a house full of kids, sometimes the only place that I can actually make a quiet phone call is when I’m in my car, thanks to the help of my hands-free device and OnStar.
However, on Tuesday I learned about a proposed cell phone ban in which the National Transportation Safety Board urged all 50 states to stop drivers from using portable electronic devices in the car.

The only exceptions to the proposed ban: using your GPS to navigate would still be allowed, and you’d get a pass on using your cell phone in the car in an emergency.

Does calling in my pizza delivery order count as an emergency? Kidding.

Not surprisingly, lawmakers and police are split on the policy, mostly because it will fall on local authorities to enforce such a ban. Local police are already having a challenging time figuring out how to fairly enforce the no texting while driving law already in place in most states. (Was that driver texting or dialing?)
And trying to figure out if someone is talking on the phone through a small Bluetooth headset or other hands-free device will be even more difficult for police officers. More like impossible.

Instead of banning mobile phone use in the car across the board, which most law enforcement and transportation experts agree would be extremely difficult, some are calling for more education and support for initiatives that help show the dangers of talking on a cell phone while driving, similar to some of the texting while driving programs we’ve all seen–like this texting while driving youtube video which was a huge hit a few years back. (Warning: It’s heavy.)

Though we at Cool Mom Tech strongly advocate staying strictly hands-free when using the phone in the car, we agree the roads probably would be safer without any sort of cell phone usage whatsoever. But is a total cell phone ban feasible and realistic?

What say you, mamas? Should any sort of cell phone usage be banned in the car?