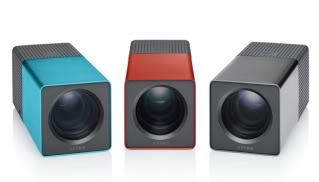 As a casual photographer whose muses are three never-stop-moving children and one wiggly black lab, I am constantly frustrated by the shot that almost was. In the second or two that it takes my camera to focus on the image I want, it’s gone, and I’m often left with another blurry photo of an ear or a blinking child.
But what if there were a camera that let you shoot first and focus later? Sounds too good to be true, but indeed there is a new camera that claims to do just that. And if the hype is anywhere near the truth, I want to get my hands on one.

Lytro is being touted as the only “light field camera” which means that instead of grabbing an image, it collects all the light in every direction which allows you to decide, after the fact, what it is you want to focus on in your frame—your daughter’s smile or your son making a face way in the back corner of the photo.

The good news is that you can constantly readjust the focus while the photo is online, so you’ll never “lose” part of the image if you focus on one area.

To see how the Lytro works, check out the Lytro gallery. Fair warning: I lost several minutes of my morning poking around the images. I love how a blurry shape way in the back becomes crystal-clear with just a click, and the colors are stunning.
The only thing that seems to be missing is the option to “focus all”, something I would love since my kids rarely line up on the same plane when they are running around the yard. Fortunately, Lytro reports this will be an option in the camera this year. Keep in mind that Lytro has no flash, though, so while it will work in low light, images may be a bit grainy.
And for those of us who still print images of photos (raising hand), Lytro images can be converted to a JPG and printed as large as 5″x7″.
Lytro is not an inexpensive camera, starting at $399 for 8GB which holds about 350 pictures. And the shape will take a little getting used to for those of us used to relying on our slip-into-our-pocket smart phone camera for everyday. But, for those who love having the latest-and-greatest in technology, Lytro may just change the way you take, and look at, photos. Just get ready to have everyone you know asking for a demo. –Christina

Lytro, in both 8GB and 16GB formats, is backordered, likely shipping this spring.