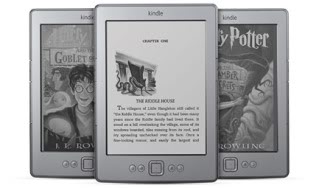 Part of the magic of J.K. Rowling’s Harry Potter series is that my kids are still as crazy about the stories as they were when they first read them a couple of years ago. And today, they are all aflutter about the lastest news about The Boy Who Lived: J.K. Rowling has decided to hold a coming-out party of sorts for this series that launched 14 years ago by releasing the entire series digitally.
I guess Hogwarts Library finally let its eBooks out of the Restricted Section.

Starting today, the complete Harry Potter collection can be downloaded to all major e-readers, tablets, and even on the diminutive iPod Touch, though–sorry–you can’t use the Engorgio charm to make the reading screen bigger.

This makes it so much easier to cart along all seven titles wherever we go. Because, unlike Hermione, we can’t figure out the Undetectable Extension Charm to fit all the hardcovers into one tiny bag.
And, what’s really interesting about this announcement? J.K. Rowling has worked some sort of spell on Amazon and Barnes & Noble to insure that her books get the star treatment they deserve while still directing all sales to go through the Pottermore storefront. Talk about magical powers. –Christina
Harry Potter ebooks are available for your Kindle, NOOK, and other e-readers and tablets beginning today, at Pottermore.