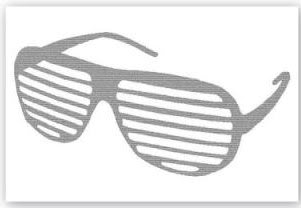 If you’re stumped for a great, unique, LOL gift for that celeb-loving, social-media loving person in your life, we’ve found a gift that we can pretty much guarantee they don’t already have: A black-and-white poster created from the words of an infamous Twitter feed.

NovelPoster’s Twitter Posters are made up of teeny tiny type that is pulled directly from the Twitter feeds of such notables as Katy Perry, Shaq, and Stephen Colbert. Oh, and of course, Kanye West whose bon mots are sure to have your nose pressed against the poster for a good long time.

Similar in style to Spineless Classics, NovelPoster’s Twitter Posters are three-feet at their widest point and definitely will make a big statement wherever they hang. But do keep in mind that while I know a few tweens who would knock me over to get their hands on the Katy Perry poster, the language has not been sanitized for younger readers.

Also, these posters only include Twitter feeds through December 31, 2010, so the material may be a bit dated. Though, we think the novelty of them is so cool, it won’t matter if their 140 characters are a few years old. Think of them as Twitter Classics.

Visit NovelPoster to purchase their Twitter Posters or Book Posters.