The Avengers are here… to protect your phone. 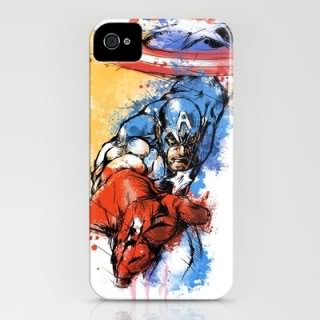 After seeing the Avengers movie yesterday, I fully believe that the Avengers are the toughest superheroes in the world (and Asgard!). So who else would you trust to keep your phone safe from dents, scratches, and villainy?

We love Captain America because he’s principled, forthright, tough as
nails, and virtually indestructible. And hey, guess what? So is this impact-resistant, slim Captain America iPhone case for iPhone 4 and 4S from our friends at Society 6.

If
you’ve seen the Avengers, then you know that the Hulk was part of the
best. fight scene. ever. I mean, who would get up after that? The Hulk
is basically indestructible, and so is this cool Hulk iPhone 4 case from PDP.
HULK SMASH? Yeah, no problem.

Iron
Man and Thor, working together? Pretty unlikely, for anyone who knows
how big their egos are. Almost as unlikely as finding a Marvel phone case from Case-Mate that’s
available for iPhones, iPod Touch, several
versions of Blackberry, and even the Samsung Galaxy. There’s also a Thor phone case should you want him on his own (ahem).
You
don’t see a Loki case, do you? There’s a reason for that, besides the
fact that Tom Hiddleston is so cute you’d never stop staring at the
darned thing. Loki just can’t compare to these brave, handsome heroes.~Delilah