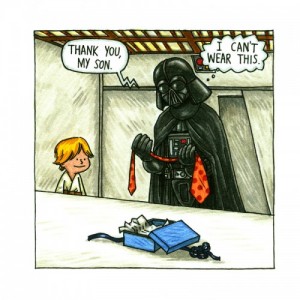 The geek world’s most tragic father-son relationship has now been channeled into the funniest book I’ve read this year. If you follow our sister site, Cool Mom Picks, you might have even noticed it in our recommendations of Father’s Day gifts for geek dads–it’s that good.
Let me put it this way: if Chronicle hadn’t been kind enough to send me a copy, I would be rushing out to Tosche Station to buy one for my husband immediately.

Imagine Darth Vader as a normal, sensitive dad attempting to parent your average preschool boy… who has Force powers and a lightsaber. Add adorable drawings that delve deeper into the Star Wars universe than you would expect, and you get some seriously hilarious scenarios in Darth Vader and Son. What I appreciate most is the attention to detail– all the background characters are actual background characters. And you’ll recognize the scenes, the set-ups, the famous lines tweaked just enough to make them clever. It’s clear that the author/illustrator Jeffrey Brown loves Star Wars (and hates Jar Jar Binks) as much as we do, and that’s why it works.

Don’t just take my word for it: the Star Wars mythos is accepted as
history around our house, and my husband turns up his nose when his
favorite characters are watered down or made ridiculous. However he
sternly plucked Darth Vader and Son out of my hands, started grumbling, and then couldn’t stop laughing.

And then he didn’t give it back.

It is a little pricey for a hardback book you’ll read in under ten minutes. But think of it like the Far Side– you can pick it up anytime for a little giggle, and it’ll be great to lighten up those long hours spent on the bathroom floor, potty training your Padawan to sink the Death Star.~Delilah
Find Darth Vader and Son at your local indie bookstore or at our affiliate, Amazon.