The latest news from Apple that parents should get excited about 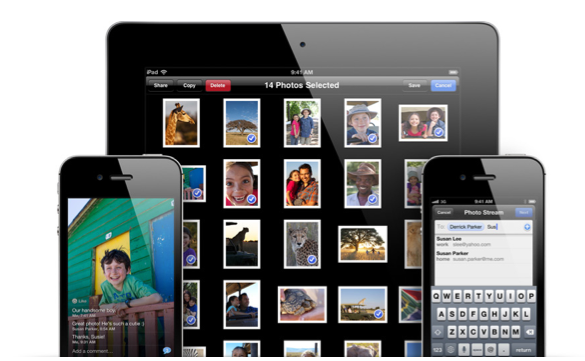 Anytime Apple holds a big event, we at Cool Mom Tech wait with bated breath for the news of their next great tech innovations. Yesterday at the WWDC (World Wide Developer’s Conference), in usual Apple fashion, their announcements didn’t disappoint. Yay for iOS 6!

Here, a quick recap of what we’re most excited about. Hint: Apple products are about to get a whole lot thinner, faster and fancier, from the MacBook Air to remarkable changes on the iPhone and iPad.

MacBook Air and MacBook Pro changes
I’ve been eyeing the MacBook Air and Pro line of laptops for a while and was happy to see that they’re making some very cool changes to both–faster processors are a boon to multitasking moms. So between answering emails, paying bills and downloading those photos, you’re going to save a whole lot of time. More time for Angry Birds!

The MacBook Pro is getting a brand new design as well, with a super crisp screen (using the same Retina technology of the new iPad) and a much thinner and lighter body, looking more like the Air. Weighing in at just 4 pounds, the new Pro will add little extra heft to the diapers, snacks, wipes and toys that are already hanging off our shoulders all day.

iOS 6 is coming!
On the software side, there are a lot of updates being made to iOS 6 that’s going to make our obsession with our Apple devices even stronger, if that’s even possible. Obviously we already think that the iPhone is perfect for parents. But here are a few of the new features we’re really looking forward to:

Facetime Goes 3G
Right now, Facetime is relegated to Wi-Fi networks–a huge pain in the rear when you don’t have a Wi-Fi password or just don’t have good connectivity. When iOS 6 rolls around however, Facetime will be available over the regular 3G network. Hooray for video chatting directly from the playground, so your mom can watch live as her granddaughter tackles the twisty slide by herself for the first time.

Answering iPhone Calls on Your Terms
How many times have you wished that you had more options than simply answering a call or declining it? Now you will. Say your toddler is in the midst of a meltdown and you can’t answer your call; iOS 6 will now ask if you’d like a reminder to call back later, or just to reply with a text. It will even offer preset text options like, “I’ll call you later,” or “What’s Up?” at the tap of a button. Unfortunately, there’s no “My toddler is having a tantrum, please stand by” reply. But I think the others should suffice.

Do Not Disturb
For those times when you just need to take a break from the world (refer to tantrum example above), the Do Not Disturb feature will let you block out any unwanted phone calls, texts, alerts and notifications while the phone remains on. What a perfect idea for family dinner time.

For safety reasons though, you can designate whose calls can get through, or even have it disengage when someone calls twice within three minutes which could indicate something urgent. Really thoughtful.

Apple Maps
Oh, how I’ve come to rely on GPS navigation when I’m trying to find that random jumpy house birthday party place 20 miles away. The brand new Apple Maps app is going to include turn-by-turn directions and a cool 3-D photo rendering feature called “Flyover” of the location you’re trying to map. Maps will also be accessed directly from the lock screen, so you won’t have to fumble around with the phone when you’re looking for said jumpy house location.

App Locks
Worried that your kid will find her way from Fruit Ninja over to your Facebook account? No worries–you’ll be able to lock him out of particular apps. That should put a lot of us at ease when we hand the iPad over in the back seat of the car.

Guided Access for Kids With Special Needs
We already know that the iPad in particular has been a boon for kids with Autism or other special needs. Guided Access will let you limit your device to a single app by disabling the Home button, or restrict touch on certain screen parts to help keep kids focused. Other features will specifically be available for those who are hearing impaired or have low vision.

More More More!
There are about 200 total updates to the new iOS including cool features like Find My Friends, should you want to locate other iOS 6 users for a spontaneous play date. Siri is coming to the new iPad, which is great. There will also be a Passbook app for storing things like tickets, passes, coupons and store loyalty membership numbers in one place (kind of like Google Wallet) which you can see above at left. More and better Facebook integration. Amazing improvements in photo sharing (seen at very top).

Check out Apple’s iOS 6 update page if you want to “ooh” and “aah” at all the other wondrous updates coming your way.

The only bad news from the WWDC: the new iOS won’t be available until the fall. Judging from what we’ve heard so far, we’re pretty sure it’ll be worth the wait. -Jeana

Apple’s iOS 6 will be available for iPhone 3GS, 4 and 4S; iPad 2 and new iPad; and iPod Touch 4th generation. More information on the new line of MacBooks can be found on the site.