Unblock Me – You’ll be fighting over it with your kids 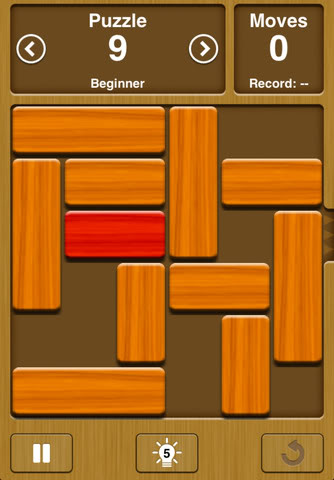 Recently a smart reader recommended the Unblock Me app when I was looking for something new to play around with, and boy was she right. What I didn’t realize however is the educational value for kids.

Unblock Me
is a series of outrageously addictive puzzles that it turns out are
doing wonders for my 6 year-old’s logic, problem-solving, and spacial relations
skills. (To say nothing of her ability to share. Ahem.) The goal is to slide the blocks around until you clear a
straight path between the red block and the exist. It sounds easier than
it is, and each puzzle and each level gets progressively more
challenging. You can also play in challenge mode, which compels you to
solve the puzzle with as few moves as possible, or get clues if you’re stumped.

With 400 puzzles in all you’re getting a heck of a lot for your money.
Which happens to be zero dollars. Of course you can also spend $.99 for
an additional 3000 puzzles or so, but try the free version first and
make sure it’s your kind of game.

Just don’t say I didn’t warn you when you blink and realize an hour has
gone by. Or if you dream about those little blocks at night. It’s like a
Tetris flashback, only in HD. –Liz