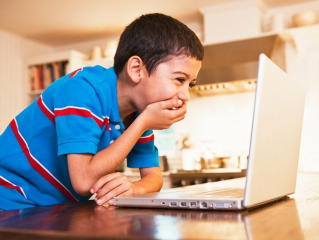 Just this week, Facebook leaked that they are considering allowing kids under 13 onto the site, albeit it with parental supervision.

There’s been lots of speculation as to why (stocks down, need new readers for page views), so it makes sense to target the group of people who marketers are trying desperately to reach–although we’ve also heard that the under 13 section will be ad free.

While the current rules state that users must be 13 or older, let’s be honest here; there are an estimated 7.5 million underaged kids already on Facebook, many of whom did so with their parents’ help. Actually, more than 1/3 of them, according to a Microsoft study reported in AdAge.  Even so, this is serious issue–whether they’re 10 or 14, quite frankly–and one that bears discussion from parents. So here are our concerns about kids on Facebook, and where we stand on the issue. Of course, we’d love to hear your thoughts too.

No matter how private you think your kid’s settings are, you can’t entirely control what they’re seeing and responding to on Facebook unless you’re sitting next to them the entire time. This is feasible at home, but not if they’re accessing the site from a mobile device or the library.

It can be nearly impossible for a parent to think of every possible
scenario where someone might ask them for personal information, or
request a photo.

While Facebook has discussed linking underage accounts directly to the parents (and we recommend that even for older teens), we’re not quite sure how effective this would be. If kids know that all their actions are being monitored by their parents, will they even want to use the site?

Will they set up a second “real” account by typing in a fake birthdate?

Supervision takes some serious education on the part of parents, many of whom aren’t even aware of the implications of posting photos and updates on Facebook, let alone the ever-changing privacy settings. While we’re seeing more parents take an active role in their kid’s technology consumption, it’s not something that all parents are thinking about as much as we are. Or something they may not have the time to do, considering how often kids use social media.

On the flip side, required supervision could actually make Facebook safer for older kids as well, because let’s face it: the difference between a 12 and a 13 year old isn’t that huge. We can’t say it often enough: Parents should be monitoring their kids on Facebook whether they’re 13, 15, or 17.

Concern #3: Cyber bullying
Obviously all parents are concerned about cyberbullying these days, which can take the form of texting or “hate” blogs. Facebook makes it easier for immature kids to harass their peers. Especially considering photos (doctored or not) and words can live indefinitely in the cache. If your younger child is going to be on Facebook, it’s extra important that you have frank bullying talks frequently, so that if your child is a victim (or a perpetrator) you can stop it before it has a chance to blow up.

Photos and posts are forever on the internet. Enough said?

Concern #5: Marketing and data mining
I’ve had to give my 7-year old daughter a full education about spam and
pop-up ads just to play her little Webkinz game, so I can only imagine
how much parents are going to have to talk to kids about Facebook ads. Especially ones that don’t seem like ads, like a game invitation. (Companies like McDonalds currently have Farmville integration.)  I’m also wondering what the guidelines for advertising to tweens and children will be.

While parents are rallying for an ad-free experience to the under-13 accounts, there’s still the issue or Facebook –and their advertisers–mining the data and usage habits of children in order to profit.

On the positive side, so many people are using Facebook outside of the socializing aspect that we might expect. More classrooms utilizing it as a way to connect student; families use it as a way to share photos and stay in touch; and so it could be that the benefits for our kids will outweigh some of the scary downsides–most of which will just require more effort on our parts.

Heck, this could be the way for us to actually keep up with ours kids better and find out what they’re up to without having to grill them every night. Of course it won’t (and shouldn’t) replace actual conversation, but for those with elusive teens, maybe Facebook will bring you closer together. –Kristen

We’d love to know what you think – is opening Facebook to children the end of the world as we know it, or the opening of an exciting new one?