Back to School Tech: Educational apps for little kids 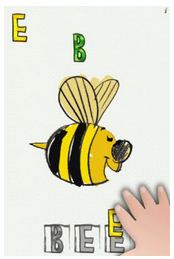 It’s back to school time as you may have heard (ha) so over the next couple of weeks, we’ll be serving up a few mini-guides to help get you ready, keep you organized, and get your kids excited. Today’s picks: educational apps for the younger kids in our lives.

Basic Spelling: Freefall Spelling
We love this simple, colorful app that allows kids to arrange letters to make simple words. And even though the letters are illustrated, they’re still easily recognizable to early readers, which can be a challenge with some of the more design-y apps. (iOS, $1.99)

Early Math: Little Digits
Little Digits is a great way for preschoolers and pre-preschoolers to get the hang of counting with fingers–the screen actually tells you how many fingers are touching the screen when you answer basic math questions.  (iOS, $1.99)

Early Math: 0-10 Numbers
This is a very simple but cute flashcard app to introduce numbers to kids in the 2-3 range. The characters are cute in that Schoolhouse Rock kind of way and for a free app on Android, it’s not so bad. (Android, free)

Good Hygiene Habits: Pepi Bath
If your kiddo is off to school or daycare for the first time, it’s comforting to think that they’ll know just what to do with that bar of soap, even when you’re not around. (iOS $1.99)

Colors, Patterns, Shapes and Creativity: Colorforms Revolution App
It’s as good as the original vinyls Colorforms we had as kids and that’s saying something. With lots of options and plenty of ways to play, kids will be learning without even knowing it. (iOS free-$2.99)

Your First eBook: Pat The Bunny
Young preschoolers won’t be able to resist this classic which comes to life so beautifully in iPad app form. (iOS, $4.99)

Early Music: Kids Piano
This musical app gets high ratings from parents who like the simple interface and nice tones–though arguably it sounds more glockenspiel than piano. Not that your kids will mind. They can either learn to play sheet music or just bang around with the keys. (Android, $2.49)

Amped up ABCs: The Numberlys
You have to love an alphabet app/ebook/film that our editor describes as ” Fritz Lang’s Metropolis sprinkled with Apple’s 1984 commercial.” You’ll enjoy this one as much as your kids do–but you can shut off all the sound when you want them to enjoy it alone. (iOS, $5.99)