Build your own LEGO empire… in Australia! 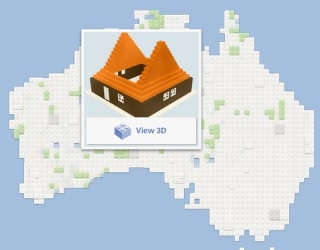 LEGO has gotten so sophisticated. Whether you’re into female scientists or hunting swamp monsters, there’s a set for that with all sorts of fascinating accessories.
But here’s a free online site that takes LEGO back to its roots: claiming a plot in Australia and building your LEGO empire from the ground up with good, old-fashioned e-bricks.

Build with Chrome is a fascinating way to explore the world using old-school LEGO blocks. Just select your own personal plot of Australia or New Zealand, and start building; think Google Earth plus LEGO.

You can choose block size, shape, and color, plus add windows and doors. Change the angle, rotate your work, zoom in, zoom out. The sky is literally the limit– well, the sky, and the TOS, which forbids the usual profanity, vulgarity, preaching, selling, and harmful images.

I’m not a Lego master, but I did find it challenging to stack the bricks just so. Then again, I was building in black blocks, and lighter colors seem easier to work with. The site is relatively smart in some ways, such as knowing which angle of brick you’ll want next. And it won’t let you do things that defy physics. But for an older kid with an analytical mind, I can see a lot of hours spent happily building in ways that little brothers can’t knock over and Mom can’t trip on painfully in a dark hallway. Once you’ve built something and published it to your plot using a valid email address, your work will be on display forever, and Lego and Google own full rights to sharing it.
Oh, and for right now, you can only build in Australia and New Zealand, but surely they’ll open up America soon.

That’s what Manifest Destiny is all about– homesteading with plastic bricks.~Delilah

Check out Build with Chrome— it’s totally free!
[Thanks to Amy at Wasabi Pro]