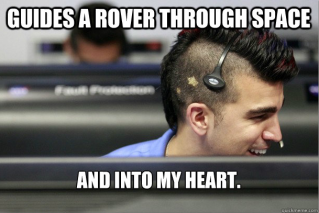 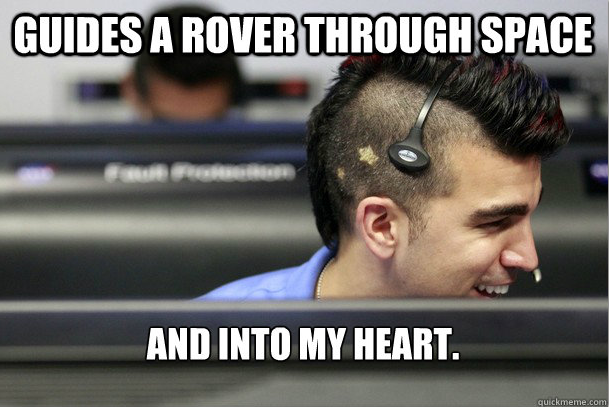 We were riveted when Curiosity landed on Mars, watching intently to see all the scientists, hugging and celebrating.
And then…we saw our new geek girl crush, Bobak Ferdowsi, known around the internet as NASA’s Mohawk Guy. Want to know more? Of course you do. He’s more than just a cool haircut.
Even my five-year-old has a crush on him.

NASA’s flight director and MIT grad Bobak Ferdowsi captured the internet’s attention during the Curiosity landing. Overnight, his Twitter following (@tweetsoutloud) went from 200 to over 39,000, and a tumblr (albeit one with a NSFW name FYI) was created just to keep up with the artwork, memes, and articles popping up.

Geek gods Wil Wheaton and Felicia Day are fans. And yes, you can even buy the NASA Mohawk Guy shirt from an entrepreneurial type at Cafe Geek, at least for now.

Of course, in our house, the message being received has nothing to do with instant internet celebrity and geek cred. My daughter is fascinated by the fact that someone with a mohawk got to help land a spaceship on Mars. As a first grader with pink streaks in her hair and a cat-ear headband permanently glued to her head, she’s excited to see that being smart is cool, and being kind of weird is cool, and that being a scientist doesn’t mean you can’t express yourself. Add all that to the fact that he’s intelligent, kind, and well-spoken, and we’ve got an unwitting celebrity worth caring about, in my book.
Bobak said it himself: “If my mohawk gets a few more people excited about science and this mission, that’s awesome.”
It did. And it is awesome.~Delilah
For all the info on Bobak Ferdowski, follow this Tumblr— linked instead of named, due to the curse word. Still, an interesting read with lots of videos, interviews, artwork, quotes, and articles about the scientist behind the mohawk.