Aliens and geography…a match made in app heaven. 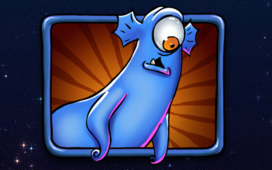 I must admit, at first I was a bit confused by the Aliens Abducted app. Is it an alien arcade style game? Is it a geography lesson as promised? Then I watched my boys play around with it, and I realized that it was both–and the kids dug it no matter the genre.

Here’s the premise: Moe is an alien who is the last
survivor of his species. Along with two other aliens, Barry and Marvin,
Moe will discover the universe around him, starting with Earth.
The
object of each level is to match up a highlighted country with its name
and flag. But you only have ten seconds and three lives.
I
must admit that my international geography skills leave much to be
desired. But rather than getting
frustrated,when I got a wrong answer I could just try again (okay,
sometimes multiple times, but still).
The
graphics are super cool, too; the Earth rotates as the alien
space shuttle makes its way around the globe, helping to give you
some perspective. Maps come to life beautifully in 2-D, and it helps to see how countries
fit together. There are also ways to further your geographical knowledge with
information on each country, their corresponding maps, and some fun quotes from all kinds of historic figures. Even Eleanor Roosevelt.
Keep in mind that if you
don’t get an answer correctly, your quite and cuddly alien friend may
get zapped, which may be a little tough on younger iPad users. Stick with the reco of ages 6 and up for an out of this world learning experience. –Eva

Aliens Abducted app is available at the app store and is available for your iPhone and iPad. It’s $2.99 which is cheaper than the price of an atlas.