Portable power thanks to the Pivot Power Mini 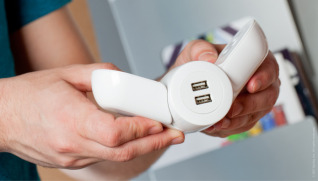 I’ve been a long time fan of quirky products; in fact I nearly squealed when I saw my favorite power strip of theirs available Target. Yes, apparently now I get excited over power strips. So when I spotted this affordable new gadget that makes charging on the go much easier, I had to snatch it up.

The Pivot Power Mini is a genius device that lets you turn a single outlet into four, giving you two grounded outlets and two usb ports. This is so smart for those of us who often need to charge a laptop and a phone on the go and don’t want to be an outlet hog (you know what I’m talking about), but it’s great for office, kitchen or really anywhere in the house use too.

Best of all, the gadget completely collapses, which means not only can you just use the usb ports while the grounded outlets are folded up, but when you’re done, you can neatly tuck the entire thing right into your bag. Awesome! -Kristen
You can purchase the new Pivot Power Mini at quirky.