The iPhone 5 is coming! 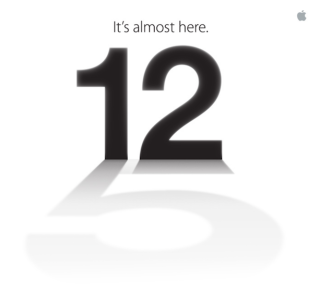 If you’re like me, then you’ve been anxiously awaiting the iPhone 5 announcement from Apple. Well, you only have to wait one more week because it’s happening on September 12.

Even though Apple did confirm that the new phone will be called iPhone 5–pretty big news for a company that has not pre-released the exact name of a product in recent years–there’s been a lot of speculation about exactly how the iPhone 5 will be different from the iPhone 4S. Tech sites have suggested everything from a thinner screen to a smaller connector.
Looks like we’ll have to wait until the September 12 event to get all that information, but for those of you, like me, who have been waiting not so patiently to upgrade from your iPhone 4, you might not really care too much about the nitty gritty just yet. Only that you will only have to wait less than a week now to get that pretty new iPhone 5 in your hands. -Kristen
For up-to-date news on the iPhone 5 launch as Apple releases it at their September 12 event, make sure you’re following Cool Mom Tech on Twitter. We’ll be live tweeting the best bits for parents.