Amazing photos of NYC businesses offering residents a power charge during Hurricane Sandy. Cheers to all of you from all of us! 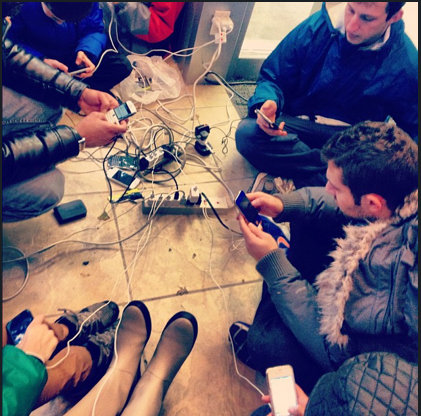 As someone who’s still riding out the storm after the storm in New York City, I’ve been inundated with stories of business owners who came forward to help out neighbors in need of a power charge…and a few who didn’t. In this day and age, our phones are our lifelines to breaking news,
emergency reports, and contact with loved ones. So a charge is more than a charge. It’s a mitzvah, as we might say around these parts.

I’ll save my ranting about the midtown hotel lobby that kicked out grandmothers (like my own mom!) and new mothers with their babies who were simply looking for coffee and a phone charge; and instead focus on the awesome businesses helping people in need of just a power strip.

You deserve huge praise
for being a good neighbor to those who needed it.

[see more awesome photos and great companies after the jump]

Cheers to Chase Bank offering power strips in the ATM vestibules around the city.
[photo scott kolb via mashable]

Cheers to the ACE hotel on 29 Street for extending a power strip for residents to use.
[photo via NY Portraits Blog]

Cheers to Starbucks which kept its Wi-Fi on for locals outside, even if the stores were closed.
[photo via ginanigido via mashable]

Cheers to the CNN mobile crew which allowed West Village and Chelsea residents to charge phones from their truck.
[photo via schmullphoto on instagram]

I’ve also heard anecdotal evidence about Duane Reade stores and McDonald’s doing the same. And
to everyone else I missed, from companies and regular people, who are
demonstrating how awesome New Yorkers can be in a crisis–thank you. From a very grateful city. –Liz

Feel free to show these companies some love on your social media networks. Yay for do-gooders!