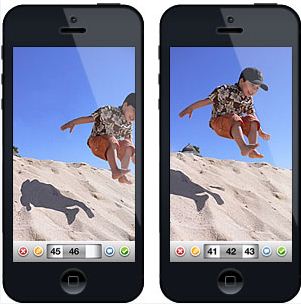 If you’re already a fan of the Keepsy app for creating photo print books directly from your iPhone, your world is about to get seriously rocked. It isn’t enough that Keepsy allows you to create printable photo books directly from your iPhone, but now, the app has been updated in a way that is going to make sure you get the perfect shot every time.

Keepsy decided to rebrand itself as the Time Warp Camera
app. As someone who also does PR consulting, a complete rebrand is
usually something that I approach with great caution. But in this case, I
think it’s totally warranted. Time Warp keeps the same Keepsy services
that you have grown to love, but the feature it has renamed itself for
actually allows you to go back in time and choose from great pictures
that you could have had, but were two seconds too late for. This is a
revelation for those of you whose kid always seems to be the only one
blinking in every group shot.
To take advantage of this magical feature, you
have to be using the camera function within the app to take your
photos. You take the picture and if you don’t like what you see, you can
scroll back in time using the “Time Warp” rewind button at the bottom
to see what the frame looked like one second, two seconds, three seconds
prior to when you took the actual shot!

How it works is that the app
has a built-in buffer of several seconds that records as you’re prepping
to take the shot, even if you haven’t pushed the shutter button. The
app also provides photo editing features that let you crop, enhance,
add effects, add text, adjust brightness and more.

So
when you’re trying to get the photo of your
daughter blowing out her birthday candles, your son’s goal at his soccer game or
any other moment where you find yourself just a millisecond too late, simply go back
in time and get the exact shot you were hoping for. With a little help
from some magical technology. –Jeana
The Time Warp Camera app is available for free from iTunes.