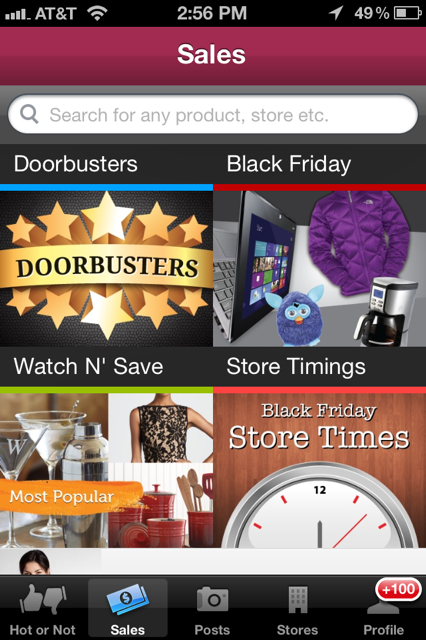 If you’re brave enough to battle the stores on Black Friday, there are a few Black Friday apps that we’ve recommended as part of your shopping strategy. While many of the general Black Friday apps contain the same deals from the same stores, we did come across a new one for Android and iOS that we think is a must-download, and will make your energy spent shopping completely worth it.
The Zoomingo Local Shopping app gives you hyperlocal sales for all the stores you frequent in your own neighborhood.

Using your zip code, the app culls the stores around you and categorizes what deals are available nearby. Which totally beats the frustration of hauling out to a big box retailer and realizing that one of the deals advertised doesn’t apply to that specific location.

Stores like Old Navy, Williams Sonoma, Staples, Best Buy, Macy’s, Nordstrom and many more are sorted by categories like  Women, Men, Electronics, and Kids. The organization makes it really easy to use, and flipping through makes it a snap (or a click) to map out which store you’re going to hit and which awesome deal you’re going to take advantage of. You can also save favorite deals to a list within the app so you don’t forget anything.

If you want to take advantage of the social aspect of following others’ deals and picks, you can create a profile and create a community of deal savers. But frankly, I don’t think that aspect is necessary since you can still access the savings and see coupons that other people have publicly posted within the app without signing in.
Good luck out there, mamas! -Jeana
The Zoomingo Local Shopping app is available for free from iTunes and Google Play.

For more great Black Friday apps, also check out Decide for comparison shopping, Shopkick for accruing store rewards, TGI Black Friday for ad-free Black Friday deals and Savvy to get alerts on price drops. We hope you find the deals you are looking for!