The new FitBit One and FitBit Zip: Don’t wait until New Year’s to get in shape 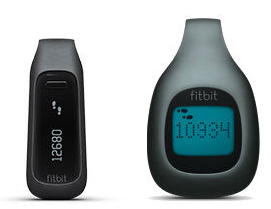 I was a big fan of the FitBit back when it came out, a handy little gadget that’s sort of a pedometer on steroids. It’s great for those of us who aren’t super hard core fitness buffs but just want to have something that keeps track of our basic activity, calories, and steps.

Well big news: FitBit has launched two new gadgets, both of which I think will make fabulous holiday gifts.
I just spotted the new FitBit One in stores a few days ago, and similar to the FitBit Ultra which it is replacing, this smart gadget tracks steps and calories, plus has an altimeter and a sleep monitor, or as I’ve joked before, a lack-of-sleep monitor for us parents. Then you can easily sync the One to your computer or smart phone to show your progress, activity levels, and calorie burns and more.

However if you’re looking to spend a little less money, I’d definitely look into the FitBit Zip, which I’ve been trying for a few weeks now.

While it doesn’t monitor your sleep like the One, the FitBit Zip pretty much does everything else the One does, but in a tinier package, like size of a quarter package. Seriously. Once you set up the Zip and sync it with your computer, just pop it into the handy silicone holder and clip it to your pocket–or your bra. In either case (yes, I tried both), it’s so lightweight I didn’t even know it was there.

On the flip side, it’s small, so if you’re not careful or you live in a house full of grabby kids, it’s a little easier to lose. But I just remembered to take it off at night and put it in the same super secret kid-safe place.

I do really like the touchscreen, which allows you to toggle between steps, calories burned, and miles, but I will say that it wasn’t super consistent in terms of responsiveness. This didn’t really bother me much, however, since it only took a couple of taps and I found the screen I was looking for. And while I’m not really a “badge” person, if you are, you’ll love the ability to earn all sorts of cool badges to help you stay motivated. Or for motivation of a different sort, you can challenge your friends and track meal plans and eating habits, all in one place.
Between the easy setup and wireless sync, I’d say it’s well worth the $59.95 price tag. And, there’s just something cool about knowing that chasing after four kids is equivalent to about 2000 calories burnt and running a 5K. Yeah!
You can purchase the new FitBit One and FitBit Zip on their website.