Rockin’ around the Christmas tree with Santa Rockstar (really) 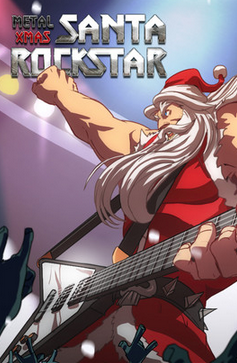 The stockings are hung, the gifts are (mostly) bought, and now I’ll spend the next few days checking my list–twice–to make sure we’re ready for the big day.

Oh, and I’ll be rocking out to this new app that takes my mind off of all I have to do in the most fun way.

Santa Rockstar for iOS and Android gives me something to do with my hands other than eat more Christmas cookies in those moments when I let myself sit down. Similar in look to our family favorite, Guitar Hero, Santa Rockstar involves tapping the screen of your device on the green, red, yellow and blue buttons to play some hard-rocking Christmas tunes.

Sounding a bit like Metal Guitarist meets the Trans-Siberian Orchestra, the guitar licks may be more than Grandma wants to hear on Christmas Eve, but my pop-music loving kids still adore this game, as evidence by how often I’ve heard a hard-rocking Silent Night playing in my house.

The game itself is playable for any age with quick enough fingers to hit the buttons as they zoom down the neck of the guitar—In other words, my eight year old is already on the Medium level while I can barely keep up with Easy.

Also, though the music is rocking and Santa is definitely hardcore, I didn’t see any other trappings of the rockstar life like sexy groupie “elves” or Santa hitting the bottle between sets. But the opening sequence of the app may be one to keep from your kids because it involves Rudolph and Santa in a sleigh accident which, though cartoon, had my youngest asking fearfully, “Is Santa…dead?”

There are also some in-app purchases where you can buy more “coins,” so do make sure you have that capability turned off in your settings–or your kids might gift themselves 900k in coins for a cool $29.99. Which would definitely not be cool.

Even with those caveats, Santa Rockstar is a lot of good, rocking fun. And if it keeps my kids from asking, “how many days?” for fifteen minutes, I’d say it’s well worth the download. Especially since I like playing it too. –Christina

Check out Santa Rockstar for iOS and Android devices.