Piquing Our Geek: Tethercell turns your phone into a remote control for anything with batteries 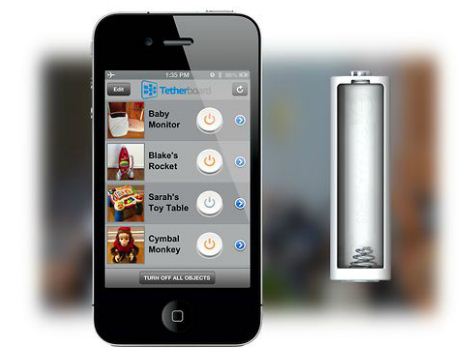 With the onslaught of electronic (aka loud) toys that my kids received from family members over the holidays, the constant drone of high-pitched electronic voices or really loud sounds wore thin by oh…New Year’s. Imagine if you had an opportunity to manually turn off those battery operated toys–or anything battery operated–right from your smartphone?

We were intrigued to hear about an upcoming device called Tethercell that
lets you do just that. Tethercell is a battery adapter that attaches to
the batteries within the compartment, letting you manually operate any device that is “tethered” to it.  You can also set timers, find out when batteries are running low, or only allow them to operate
during certain periods of time. Whoa!
Not only is this a genius concept for said
loud electronic toys, but it could come in handy for so many other
things–like when you forget to turn on the baby’s monitor, or need a
reminder when the emergency flashlight battery is running low. Presumably you could even put it in your remote control and control your remote control with your phone as remote control. Ha.

There
will also be a complementary app that lists all tethered items onto
your “Tetherboard,” letting you create a running list of the devices you can
manually turn on and off.
It all sounds very smart–and it is. In fact, Tethercell was created by rocket scientists, so I’m guessing they know
what they’re doing. Plus the CES “Showstoppers” event, the booth was definitely stopping the media in their tracks.

Count on this being a huge new thing, as soon as it gets made. I know I’d use it. -Jeana

Tethercell is currently raising money through IndieGoGo to begin manufacturing. If you
want to see the technology become a reality, you can donate on the Tethercell page!