What’s the temperature? Hey, I know! 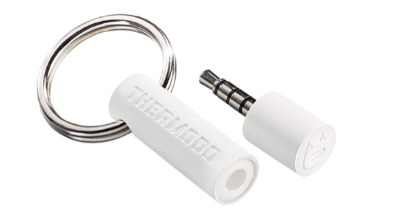 I have a confession: I have a habit “shopping” for weather reports–I tend to click around the various networks and web channels until I find the one I like. No rain, high of 72? I’ll take that one! But now there’s a device that can keep me honest–and prepared–all without even having to flip on the TV.

The Thermodo Tiny Thermometer on Kickstarter has absolutely captured my imagination–and that of thousands of others, judging from its success. In fact, this mini electrical thermometer from Robocat has already far surpassed fundraising goals and for good reason; it’s made to clip right to a keychain, and then you plug the sensor right into your iOS device, for an instant read.

(Fear not Android fans, that model is in production too, to compliment the existing Thermo app.)

In other words, you’ll know in a second how cool the baby’s nursery is, or whether you should reconsider that hike with the jog stroller, now that the temperature seems to be plummeting. It’s also great for travel, when you can’t always rely on your weather app to know what the heck to wear in the morning in San Francisco or Santiago.

Pledge $25 for one black or white Thermodo of your choice, which should be shipping in August. Just in time for it to tell you, “hey, it’s kind of hot out here today.” –Liz

Find the Thermodo Tiny Thermometer by Robocat on Kickstarter, and pledge now for some great benefits including the thermometer itself which ships late summer. Hey, $999 gets you a Cophenhagen tour with the founders!