Teaching kids foreign languages with a most genius interactive app 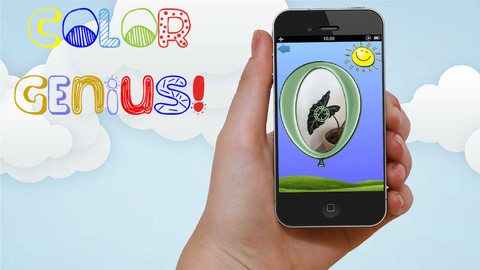 Finding nifty little apps of merit for the kids can be a chore all on its own. Every so often though we come across sweet and simple apps that not only entertain them but that also impress us.

Color Genius for iOS does just that.

It’s really the simple concept and the clever execution that I appreciate so much here: Color Genius’s games use your iPhone or iPad camera to teach your kids colors in up to 10 different languages. Whats so cool about it though is how it allows your children to interact with and learn from their actual physical surroundings and not just some picture in an ebook.

3 different games on the app will aid your child in learning their colors, each one challenging them in a new way. The main scavenger hunt style game assigns a color, and then you are to go and find something nearby in real life in that color, and match it up with using the camera. It’s like playing “I Spy” using the camera to connect the screen universe to the real world. Super cool, right?

The app even recognizes when you set the camera on the right color and your kid will be rewarded wth loud applause. Don’t worry, there’s no booing with a wrong answer; just a long “awwwwwww.”

The second game lets you focus the screen on a color, and then the app tells you what it is visually and verbally. The last game simply shows you illustrations of all the colors and gives you the answer in the primary and secondary languages you select. I think of it like color and vocabulary flash cards in one.

A nice plus on this game is the settings- you can keep it very simple for little ones, focusing on 2 or 5 colors, or you can open it up to the whole rainbow. Also impressive here are the 10 language offerings–your three year-old could really wind up being the star of the next family gathering when she rattles off her colors in French, Spanish, Russian or Korean.

Our one big note of caution with this app is regarding lighting. For best results and to get a fair game in, this game really does need to be played in a well-lit space. The flash option doesn’t really seem to work well and can distort colors yielding a wrong answer. In other words, this isn’t one the kids are going to be able to use to distract them in the fancy restaurant.

If it happens to be a French restaurant, they’ll just have to amuse themselves impressing the maitre d’ with her couleurs anyway. –Stephanie M

Download Color Genius for iPhone or iPad in the app store for $1.99 which is totally worth it.

Stephanie Mayers is entrenched in the kindie rock industry, a former gallery manager, and a self-proclaimed foodie who doesn’t get out to eat much. (Darn you, parenthood.)
Bio
Twitter