The best free music services. Because why pay when you can get it for free? 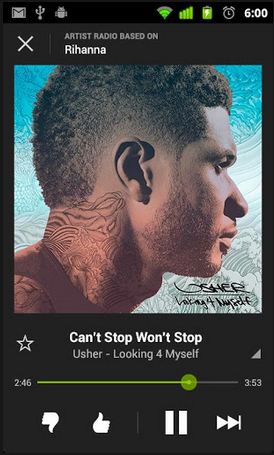 The Walkman seems like a lifetime ago, especially now that any kind of music is available at our fingertips through all kinds of music services, plenty of them free. And hey, we don’t even need to switch cassettes or push clunky fast forward buttons. With smartphones in most of our pockets, there is a limitless amount of free music at our disposal, which is pretty amazing when you think about it. Here are our very favorites, so you can figure out which is right for you. -Jeana

One of the leaders in streaming music, Spotify is a great service now in 23 countries that gives you access to thousands of radio stations (and over 20 million songs!). Once you select a musical genre, there’s a handy thumbs up/thumbs down icon on each song that is played that helps the app further customize the station to your liking. It’s also handy that each genre automatically starts playing music, rather than giving you another list of hundreds of unfamiliar radio stations around the country. And we love that listen to friends’ playlists and make our own for sharing or private use–very helpful when your daughter is in the Glee Club and you don’t want to have to pay for the One Direction single she has to practice singing “for homework.” (Just ask our editor Liz.)

The free version caps your listening at 2.5 hours a week though, and does run ads. If you want the ad free version with offline listening features and the ability to save songs, Spotify is $9.99/month. (iOS, Android, Windows, Blackberry)

BEST FOR: People who want the widest variety of music all the time.

Pandora is another go-to when it comes to free streaming music. This app also lets you customize your radio stations with likes and dislikes as songs are played and boasts the largest audience, so it’s likely your friends on it too. One challenge: They recently announced a cap of 40 hours of streaming music a week, although that’s only a problem if you listen all day long. And one slightly annoying thing about Pandora are the radio ads that are broadcast every few songs, just like the real radio, along with pop-up ads. While the app lets you skip songs you’re not crazy about, it also prohibits more than a couple skips until ads for the premium version (onlly $3.99 per month) start popping up. But if you’re OK with these minor nuisances, Pandora really offers a huge selection of music that you can personalize and share with friends, and it tends to get your tastes really well. (iOS, Android, Windows, Kindle Fire)

BEST FOR: People who want to customize their own radio station to their tastes super easily.

Rdio boasts a huge library of songs that range from the most popular to golden oldies. It’s kind of like a social network where you can follow other Rdio friends and even build playlists in conjunction with those you follow. If you’re a visual person and really like to see album covers and care about the mobile interface, then this app is for you, offering a very modern and aesthetic design. The app also provides more specific music choices than general genres, opening with “Top Charts” of current albums.

There are no ads in the basic free version, but there is also a subscription fee starting at $4.99 if you want unlimited web streaming and going upwards from there for additional device functionality. (iOS, Android, Windows)

Best For: People who know exactly what they want to listen to and aren’t as interested in discovering new music

I appreciate that iHeartRadio gives you the option to skip registration and get right to listening to live radio–definitely a nice bonus. That said, accessing the radio stations gets a little confusing because after you select a genre, it simply lists radio stations from around the country. So not only do you have to listen to ads from these streaming stations, but you might come across annoying DJs who you are glad are not in your own city. You can customize your own station by searching for songs and artists, but that’s when you have to register with email or your Facebook account. A nice feature is the “Perfect For” section that offers already culled playlists for different moods or activities, like ‘Breaking a Sweat’ or ‘Chilling Out.’ (iOS, Android)

Best for: People who want to explore radio stations from around the country

Songza is a relatively newcomer to the scene, but has already made a big impression on many music lovers. Songza helps out those less inclined to create their own stations and playlists by providing prefab stations for different moods and different times of day. I love that you can select music based on a menu of things like “Sunday afternoon” or “Friday night,” basically choosing any day and any time of day as a combo. You can also select any of its playlists without having to figure out which stations are the best or which DJs to avoid, making it a perfect choice for someone who wants to just listen to music right away. (iOS, Android)

Best for: People who want pre-determined playlists and collections with no work at all.