SquareHub: A social network just for your family. And it happens to be awesome. 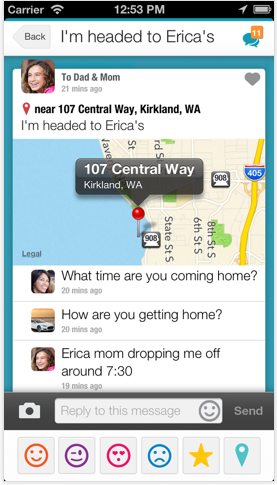 If you’re like me, you spend a lot of your day texting your spouse and kids, or calling to check in on them and coordinate schedules. Don’t even get me started on the number of emails I send.

But since I got a sneak peek at a brand new connectivity app launching today, our family has coordination has changed for the better. Way better.

Enter SquareHub, a new, free app launching today (you saw it here first!) that allows you to connect with any of your family members in your own, safe social network. It’s a great way to replace Facebook and its increasingly dubious privacy settings (sigh) or even just a streamlined alternative to the clunkiness of trying to keep up with emails, texts, and calls.

Ceated by a group of smart dads, SquareHub gives you so many simple, easy to use options once its intalled on your iDevice. You’ll have the ability to send messages, or photos which are like texts, in which you can choose specific family members or a whole group at a time.

I’m also a big fan of the “shout-out” feature, especially for those of you with driving-age teenagers or spouses always running late.  it allows you to send pre-written messages with a location tag you create; something like “I’m leaving now” or “You’d better call me RIGHT now.” Ha.

You can send to-do lists, as well as create events, and there are a few special features designed with teens and tweens in mind, like a custom photo editor, drawing tools to enhance photos (above), even a star chart for giving and receiving digital rewards for younger kids. That alone is a smart way to entice your tweens and teens who might be reluctant to move off their current favorite social networks.

The one challenge is that you have to have an iOS device to get the full functionality. However, it’s been built so that you can still send any communications to family members as texts or emails to their PCs and phones. Even a kiddo with an iPod touch and no email address is hooked up.

Also, because it just launched today, it’s still a bit buggy. No doubt the kinks will be worked out as the days go on; the team behind it seems incredibly smart and responsive.

SquareHub is really perfect for today’s digital family (like mine), who have connected kids of various ages and parents, but want to be able to communicate quickly and safely while not feeling like you’re having to adopt yet another thing. Nicely done, SquareHub. -Kristen

You can download the free SquareHub app on iTunes. Android launching soon!