Angry Birds Star Wars: Now off your screen and addictive as ever 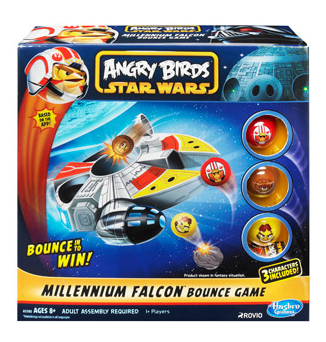 Apps are awesome, but you want your kids to get exercise, right? Well, imagine if Angry Birds Star Wars jumped off your screen and the birds were ping-pong balls. Sound better?

[don’t miss ac hance to win your own after the jump!]

We tried the Angry Birds Star Wars Millenium Falcon Bounce Game, and… well, technically, I guess we’re still playing it. Which is to say that my kids are constantly zooming their Beanie Babies around in the molded plastic Millenium Falcon and bouncing the balls all over the place, and I haven’t yet tripped on the ping-pong Chewie bird and broken my neck.

As you might guess this is not a traditional board game where you roll dice or otherwise follow a path. Instead, you bounce the Luke, Han, and Chewie bird balls at evil Empire pig stand-ups placed around the ship and get points for every hit, or for getting the ball into strategically placed holes on the Falcon. And that’s it. Meaning it’s too simple for me, but a big hit for my four- and six-year olds.

There’s also a special code to unlock exclusive content with the Angry Birds Star Wars app, which we love. Woohoo!

The game is marked for ages 8 and up, but I really suspect an older child will get bored with it. Some parental help will be required for assembly and sticker-sticking. Also know that the recommended point values are in the thousands, which brought my first grader to tears until I rewrote the rules to make each successful hit worth single digit values. But what I’m really digging is how creative they’ve gotten with the pieces; they rolled boiled eggs to knock over the Greedo pig, put Captain America and Aqua Man in the Millenium Falcon, and generally are treating this game like seven toys at once. I love it when that happens.

The Force is strong with a game that’s more than a game. Nice way to keep the padawans engaged. Or a new way to play beer pong after they’re in bed. –Delilah

Find the Angry Birds Star Wars Millenium Falcon Bounce Game at your local toy store, or at our affiliate Amazon and thanks to Hasbro for sending us one for review.

EXTRA-COOL: WIN IT! We have an Angry Birds Star Wars Millenium Falcon Bounce Game for one lucky Cool Mom Tech reader! To win, simply email contests@coolmompicks.com by midnight PT tonight with subject ANGRY BIRDS and tell us how many cardboard pigs come with the game (the answer is here, on the product page.) We’ll randomly select one winner; US only. Good luck!