Apple’s iO7 and iTunes Radio are coming: Why we’re excited. And why you should be.

Yesterday’s big Apple announcements included the introduction of the overwhelmingly awesome new iO7 operating system. In our minds, this could be a game changer for those of you on the fence about investing in an Apple phone, with helpful features up the whazoo. It does seem to take a little bit of this (ahemWindows) and a little bit of that (ahemAndroid) and yet keeps and improves all the things that work so beautifully about the Apple operating system to make our lives as easy as possible. Something parents are grateful for.

Besides being ridiculously gorgeous (no surprise there), here are the features we think parents should be particularly interested in; the ones we’re excited to see up close and in person. As in, suddenly we all seem to need new phones. Funny how that works.

There are a dozen key features brought to life on the site through mini animations which you can check out. Mostly they’re marked by a minimalist design and incredibly clean interface. But here’s what’s thrilling us the most:

IMPROVED APP STORE JUST FOR PARENTS
Let’s be honest: one of the reasons parents are evangelical about their iPhones is the selection of apps. Now there’s a new feature that lets you see which apps are popular near you–which could be kind of nifty if you like where you live. But we really like that there’s finally a dedicated kids’ app category to help you find the best apps just for them. (Then, of course, cross-check with Cool Mom Tech’s apps for kids and see if it’s really worthwhile.)

THE NEW PHOTO APP
To me, the improved photo app is the one feature that every parent has been pining for. More like iPhoto, photos grouped by date or event are sorted into “moments” making it so much easier to find just what you’re looking for. Because we know we’re not the only ones who have trouble paring down the 490 photos of our kids on our phones then making your poor office colleague stand there for 2 minutes where you scroll through them all to find the right one.

iCloud photo sharing also seems like it’s going to improve which would be quite nice.

IMPROVED CAMERA FEATURES
In addition to still, video and panoramic shooting, maybe the best thing: If you’re an Instagram user, you can now take photos directly in square format like the shot above. More filters and editing options, too. 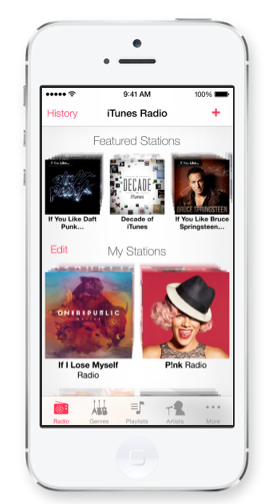 FREE iTUNES RADIO
Oh yes yes yes! While we’ve all made the leap to services like Spotify or Pandora around here, it’s about time that iTunes has their own entry. Especially because it’s free. (Provided you’re okay with ads; otherwise you have to subscribe to iTunes Match for $24.99 a year which we told you a little about here.)

iTunes Radio syncs with all your Apple devices including Apple TV. And I love that it’s not entirely built around sharing, because uh, does the world need to know that kindie rock often gets more play around here than Bob Dylan? No.

We like that you can listen to stations by genre, or inspired by your tastes or even tell Siri “play more like this” and she just may do it.  Extra bonus: The history feature, for those of us with mommy brains who forget that song we just have to download…the second the next one comes on. There’s plenty more info on the iTunes radio page.

iOS IN THE CAR
This is huge news: Soon you’ll be able to connect your iPhone 5 to your equipped car’s controls along with Siri Eyes Free. We like this as a safety precaution. A lot. It starts in 2014 with about a dozen automakers so if you’re in the market for an Acura, Chevy, Honda, Hyndai, Infiniti, Kia, Mercedes, Nissan, Volvo or a nice midlife crisis Ferrari, you’re going to get so much great use out of your iPhone on the road.

A MORE ORGANIZED SAFARI
Considering the Chrome app has made some decent inroads into the Apple market, we’re not surprised that the powers that be are amping up their own browser. The interface is cleaner (all you see is the browser–like hiding the dock on your MacBook), plus they’ve added a smart search in the URL bar (Chrome style) and a new tab view lets you scroll through your open content like a newsstand. Very smart.

The shared links tab also happens to be intriguing: You can see all the URLs tweeted in your Twitter timeline and who posted them, should you want to go back and click a bunch of links all at once. We know we’ll be using that a lot.

MULTITASKING
More akin to Apple’s desktop OS, I love that you can now swipe through your open apps, and toggle easily between your calculator, your kid’s calendar, and your photos so that your most used apps are front and center. And uh, boy that calendar looks a lot like Teux Deux down to the color scheme. Just saying.

Extra cool: the OS will track the apps you use and update your workhorses (Facebook, email, photos) more often.

BETTER TEXT MESSAGING
For those of us who live and die by the text, there are some smart improvements like adding the contact link right at the top. No need to scroll back 400 texts any more just to hit “call.” (Not just me, right?)

REMINDERS
I love the streamlined look of the new reminders screen which just makes it seasier to see what you have to do, and even allow you to create simple bullet points beneath them–because we all know that “Kids Birthday Party” involves a lot more than just “book venue.”

NOTIFICATION CENTER
Taking a cue from what seems like Windows 8’s “everything on your homescreen” live tile interface, it’s nice to see more streamlined notifications, including weather. I’m addicted to checking the weather. It’s a sickness, really.

CONTROL CENTER
Does it make you crazy to have to go into settings and try to remember where airplane mode is? Yeah. Now you can lift up a windowshade over your homescreen to toggle basics like Wi-Fi, sleep mode, brightness controls (texting emergency in the movie theater?) and your streaming music. It’s the little things, sometimes.

Now, I’m still holding off to see if Apple Maps is uh…better? Less horrendous? than it was when I made the move to Google Maps for iPhone and never looked back. If Apple has mastered that one, well that will be the biggest coup of all.

Learn more about the new Apple iO7 for iPhone on the Apple site. And pretty much every tech blog and website everywhere. It will be compatible with the iPhone 4, 4S, 5, iPod Touch, iPad 2, and iPad Mini