Magic Stickers stick in their imagination, not all over the back seat of your car 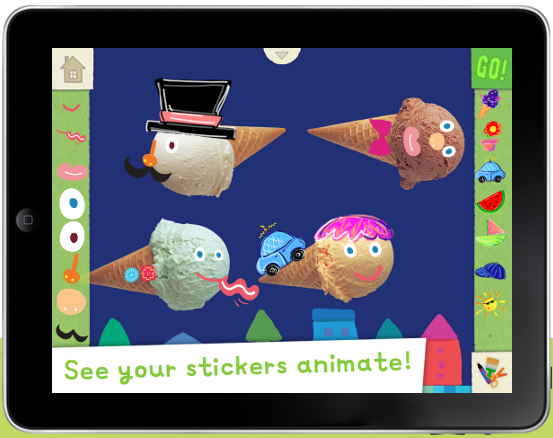 Last year, our kids were thrilled to discover the super-fun Lazoo Squiggles! coloring app that lets them decorate pictures with their own squiggles, and then watch the entire thing come to “life” through adorable animation.

And, now, just in time for all those long summer car rides to the beach, Lazoo has a new app that will keep little fingers busy and minds engaged. Plus, these stickers won’t get stuck all over your car’s windows.

What makes Magic Stickers! so engaging is that it is so ridiculously cute that kids won’t be able to keep their fingers off the screen. And, yes, I’ve taken my turn on it too because this kind of cuteness is irresistible to some 40-something-year-olds too.

With several main scenes, young artists are asked to use their imagination to turn real photos of sandwiches into mountains, or a big head of broccoli into a tree. Using the many stickers or the draw-your-own sticker tool, kids can decorate the scenes in any way they want. Hit “Go”, and the entire scene animates and plays a little song.

My son got a kick out of the “snowcone mountain” scene which he covered in snowball-throwing penguins, some which he easily supersized to create a sort of Giant Penguin Snowball War. I think you need to be an 8 year old to understand this.

For even more creativity, Magic Stickers! also has an open page to create whatever you want using almost fifty different stickers and the free-drawing tools. Touch each sticker and it will show off its “moves”. You can even take a photo of anything and then put stickers on top of that. We turned our house phone into a little bus driven by a smiling lion.

And it’s the little details that help me justify the $1.99 cost, like a short video that kids can watch when they are taking a break from creating. And like the dinosaur that comes out of the trashcan to ‘nom nom nom’ any stickers that you want to remove make even mistakes charming. Which is more than I can say for all those moments when I had to peel stickers off of the back seat of the car. –Christina

Lazoo’s Magic Stickers! is available for iOS on iTunes.