A watch that no one will ever think is a watch. Because geez, who wears watches these days? 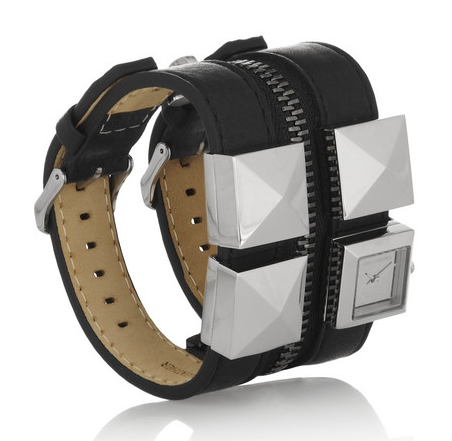 It’s been so long since I’ve worn a watch, it’s hard to believe that I ever used to use the expression, “it’s like leaving home without a watch on!” And yet I’m totally drooling over this number from a top fashion designer.

The Karl Lagerfeld Zip Studded Leather Watch looks exactly like an awesome, updated version of a Madonna-era stud bracelet. The minimalist watch face is cleverly disguised as one of the studs, and the bracelet itself adjusts from about 6 to 7″. It’s a splurge, but wow, what a splurge it is; it’s almost as if I could start checking the time again without digging into my bag for my phone. Hm, imagine that idea. –Liz

Find the Karl Lagerfeld Zip Studded Leather Watch at our affiliate Net-A-Porter or in fancy stores near you.