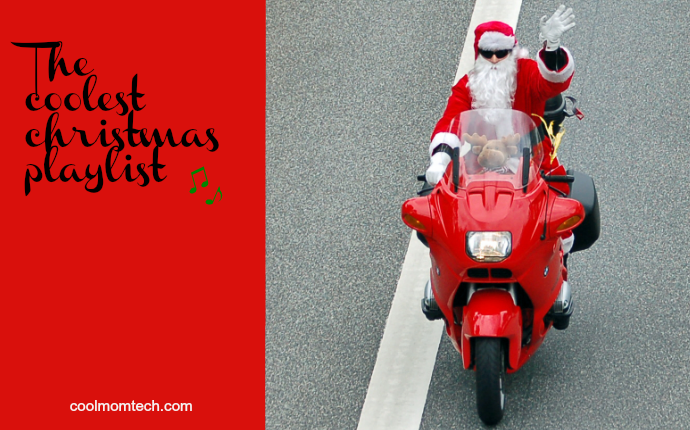 Whether you like the newer songs or the old classics, we asked our Cool Mom Tech writers to pick out their favorite coolest Christmas music to play with their families and wow, what a variety we got! From Johnny Mathis to Ella Fitzgerald to the Muppets. Download each one to own it, or add to your Spotify playlist and maybe you’ll find a new “perfect song” to get you in the mood for the holidays.

While it’s not the original from the movie, this version of Heat Miser is pretty darn close. My kids and I can’t stop listening and singing along. –Kristen Chase

Christmas Wrapping, by The Waitresses

I can’t help it, I’m a child of the 80’s and Christmas Wrapping by The Waitresses still makes me want to dance (Molly Ringwald style) every time I hear it. You mean you forgot cranberries too? Just be warned that the earworm could last well into the New Year.

Runner up (Because don’t make me pick just one!) has to be Straight No Chaser’s 12 Days of Christmas which my kids just discovered and now think it’s the most clever, hilarious thing they’ve ever heard. Especially the part with the Dreidel Song –Liz Gumbinner

Happy Xmas (War is Over), by John Lennon

Starting with So this is Christmas, and what have you done…John Lennon’s poignant Happy Xmas (War is Over) always reminds me that Christmas should be about giving, especially to those in need. –Christina Refford

Santa, Don’t Get Stuck (In My Chimney), by Ella Fitzgerald

I love jazz versions of Christmas favorites that would sound lively behind party chatter. Ella Fitzgerald’s Santa, Don’t Get Stuck (off the surprisingly fun Yule Be Miserable) makes me crave a table sagging with spicy Chex Mix and my grandmother’s peanut candy. –Delilah Dawson

The Christmas Song, by Bing Crosby

I’m the Christmas music junkie who starts playing it non-stop the second Thanksgiving is over. I think the classics are still cool, especially anything by Bing Crosby. The Christmas Song’s first lyric of chestnuts roasting on an open fire always makes the house feel so cozy and definitely gets me in a holiday spirit. –Jeana Tahnk

It Must Be Santa, by Bob Dylan

I still feel guilty that my first reaction to the Bob Dylan Christmas album was not complete elation. I have grown to love this entire collection, however It Must be Santa is just an instant holiday party. . .so completely unexpected from Bobby D. I dare you to not to sing and dance along. –Stephanie Mayers (This is my pick for biggest, most wonderful Christmas song surprise!–Christina)

Have Yourself a Merry Little Christmas, by She & Him

When it’s Christmas Eve and I’m drinking eggnog and sitting in front of the fire with my kids, it doesn’t get any better than this song. I happen to be in love with She & Him’s version right now. Zooey Deschanel’s easy, laidback voice sets the perfect mood. I can’t help but sing along. –Kate Etue

There’s just something cool about Bing Crosby and David Bowie (and me) crooning Peace on Earth/Little Drummer Boy that makes the holidays feel a little more magical in a vintage-meets-retro-meets-throwback kind of way. You’ll need to download the entire Christmas Classics album to grab this song, but the entire collection is a keeper. –Pilar Clark

Have Yourself a Merry Little Christmas, by Judy Garland

Judy Garland’s version makes me cry every single time I hear it, mostly for the line “through the years, we all will be together…” . And I like to cry at Christmastime.  –Shari Simpson

Christmas Time is Here, by the Vince Guaraldi Trio

I’m not a big fan of Christmas music, but I am a big fan of Snoopy. Nothing sets a Christmas-y mood for me quite the way that hearing the vocal version of Christmas Time Is Here by the Vince Guaraldi Trio does. It’s not Christmas time without it. –Stacie Billis

Once in Royal David’s City, by Sufjan Stevens

I’m a fan of almost every Christmas song in the world, but a few years ago a friend introduced me to Sufjan Stevens’ Christmas album and I fell in love with his Once in Royal David’s City. Way peppier than I’ve ever heard it done before, and super-fun for my little revelers when they rock around the Christmas tree. –Stephanie Slate

I used to hear this song all the time at my Starbucks in New York, which is one of my very favorite places to be for the holidays (New York, that is; not necessarily Starbucks), so it has lots of good memories attached. Plus it practically demands that you sing along. –Julie Marsh

As a kid, music was really important to my dad and A Christmas Together was, by far, my parents’ favorite Christmas album. With the Muppets involved, you might think it would be cheesy or only for the kids, but it really is beautiful music and my holiday wouldn’t be complete without it. It’s hard for me to pick just one song because the whole album is just that good, but I especially love this medley from  John Denver and the Muppets. -Kristin Camplese

We’d be remiss if we didn’t also mention the great kindie artists who have put out Christmas music for families. Just check out archives for lots of other must-have downloads to make your season bright.