Amazon debuts 5 new original kids’ shows: Which are worth watching? The real scoop. 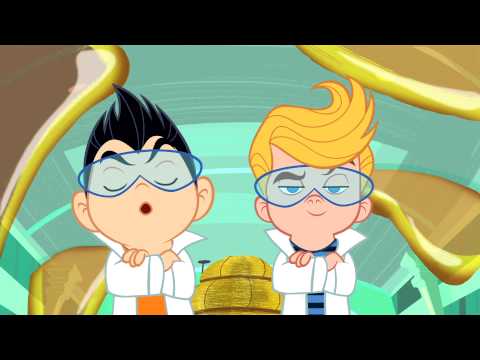 As if the post-holidays blahs weren’t bad enough, now we have to contend with this Polar Vortex business too? (Not a word out of you, SoCal and Miami readers.) School cancellations have all but depleted most of our shallow buckets of ideas for staving off kiddo cabin fever. So right in time, Amazon Studios just debuted five new original TV shows for kids, going after the Netflix model of original series, and targeting families with children more specifically.

Best part is: the pilots are all available for free on AmazonPrime Instant Video so you can watch before you commit. 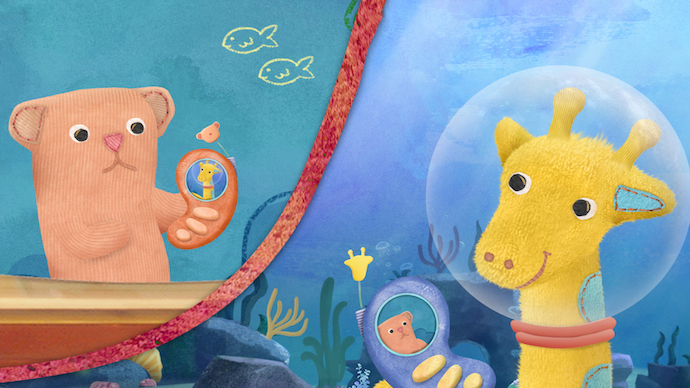 The basics: It took me a few minutes to suspend my grown-up sensibilities (fine, my snark) while watching this animated series which follows best friends Jo B., a stuffed bear, and G. Raff, who’s–you got it–a giraffe, who together host a TV show. The problem is, while Jo B. is a self-admitted homebody, his long-necked buddy likes to hit the road, falling into adventures and fun wherever he roams, and he’s never around when it’s time to start the show. In the end, they always find a way to “meet in the middle” and get back to singing about being best buds.

The Verdict: The show was created to help teach preschoolers about compromise and resolving conflict in constructive ways. It will succeed there. As for jaded adults watching along, it’s no Yo Gabba Gabba, so this might be the one your kids watch while you catch up on Facebook. Or, you can just ease up and let G. Raff be great. 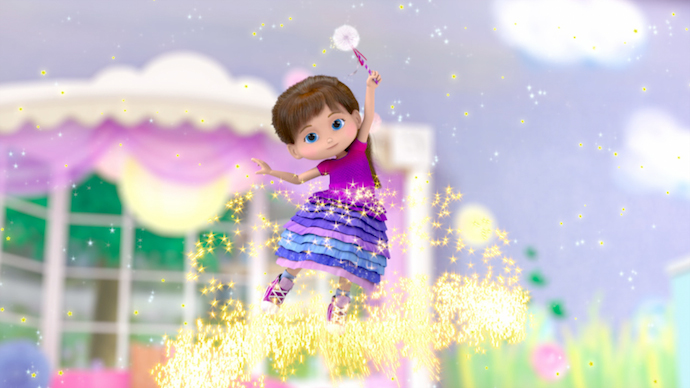 The basics: Written by Angela Santomero, the creator of Blue’s Clues and the Emmy-nominated Super Why!, this animated show is about Bianca, a little girl with “wish magic,” or the power to make wishes come true. (Um, can she be real and come over to my house?) Bianca is still trying to get the hang of her powers and sometimes–comically–it takes her a few tries to get the wish right. One day she hopes to be as good with her wish wand as her mom. It’s her mother along with Bianca’s silly sidekick Bob, a stuffed bear, who remind Young B that with or without magic, she has the power to help her friends.

The Verdict: It’s cute and fun, with plenty of singing and fairy wings and magic glitter boxes but really, it’s about teaching children to make good choices and solve problems. I assumed at first that it was for the 3-year-old princess-loving set. However, after watching the pilot, my freshly turned 5-year-old son said: “That was a good show, Mom!” Magic glitter goes a long way. 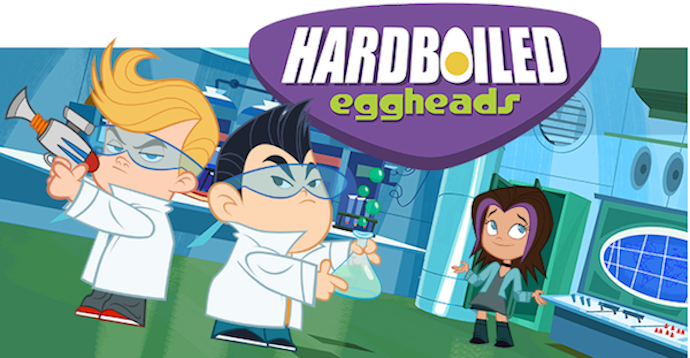 The basics: This action-comedy follows super-precocious (a nice way of saying “nerds”) friends Kelvin and Miles. But real talk? These two grade-schoolers, with their retro-cool specs, coifed up hairdos and perma-frowns, look a lot less like geeks and more like hipster Brooklyn dudes working at the coffee shop. All that’s missing is an ironic forearm tat. The twist: Kelvin and Miles are more than just brainiacs, they’re actually classified special agents using their futuristic inventions–and a little help from their non-spy homegirl Pilar–to battle monsters, Martians and other cosmic crooks.

The Verdict: This terrific series is created by Emmy Award-winning writer and producer Duane Capizzi (Transformers Prime, Jackie Chan Adventures), and the quality totally shows. The top-shelf animation is sure to keep little peepers locked in on the screen. And the Eggheads’ wacky escapades will have the 6- to 11-year-old crew coming back for more. 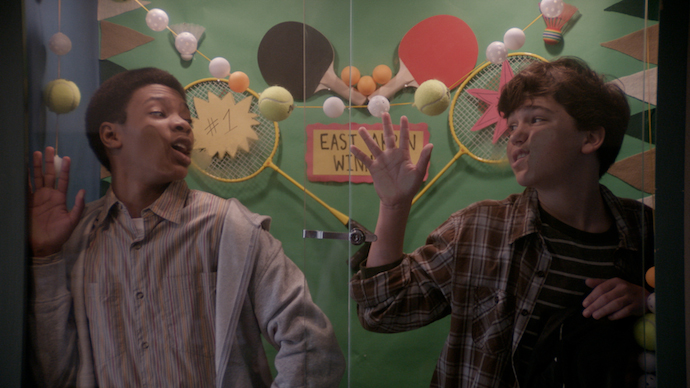 The basics: Angus, Wolfie and Jo, are three tweens who are all about inventions and creating gadgets to help out other kids at school. The show is a collaboration between think tank Applied Minds and production company Electus. Clearly they’re taking a page from some of the popular Nickelodeon tween sit-coms here. Or trying to.

The Verdict: Maybe it’s the low-budget ’90s vibe or it could be the unfunny, schlocky dialogue, but I am just not that into this one. I couldn’t sit through the whole thing–which is only 27 minutes. I was bored before the all the characters were fully introduced. Although I did sit up in the very beginning when I recognized actor Brian Baumgartner, who played dopey, always hungry Kevin on The Office. But that flicker of interest faded right around the time Baumgartner, in the Principal Downing role here, got hit with trays of cafeteria slop … as he was about to get back on his Segway. Sigh. 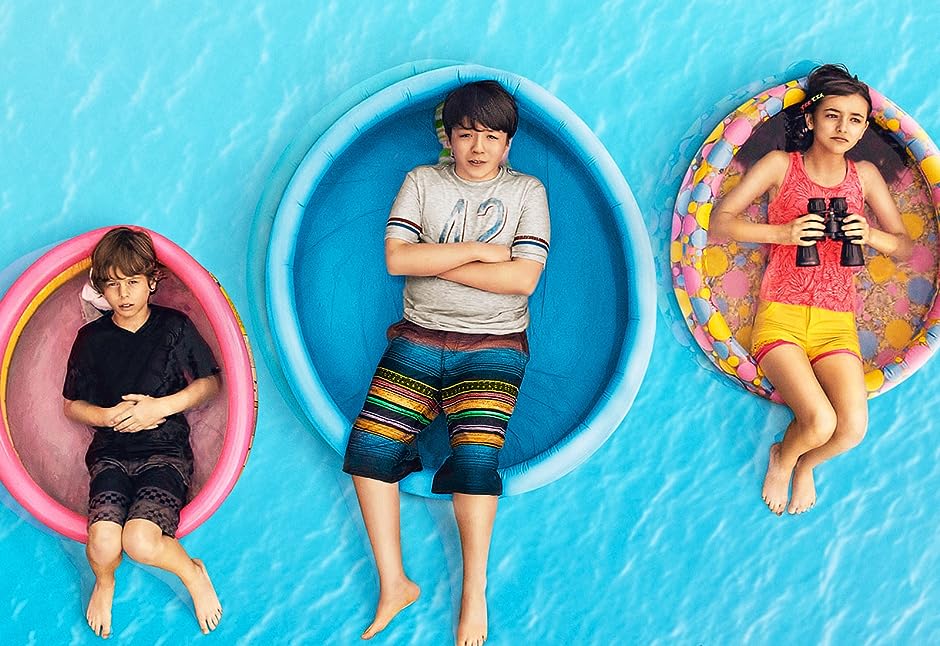 The basics: This live-action adventure show revolves around Gortimer and his two besties–literal “little” buddy, Ranger, and the smart-chick, voice of reason Mel. The engage in suburban shenanigans even while living on the slyly-named Normal Street. Spoiler: It’s anything but normal there. As if you wouldn’t have guessed. There’s a hint of something magical afoot, almost like a kids’ version of Lost, but without the unexplained smoke monsters and frustrating cliffhangers.

The Verdict: I really like this show and highly recommend it to the middle-grade adventurers out there. The pilot is sweet and funny, in an organic way and a lot of credit for that goes to the three young actors playing the lead roles. There is an Encyclopedia Brown-feel to the show which I love. However, the mysteries here aren’t as involved as in the Brown stories which could be a good thing. I definitely see Gortimer and Co. catching on as a must-watch series for older kids.