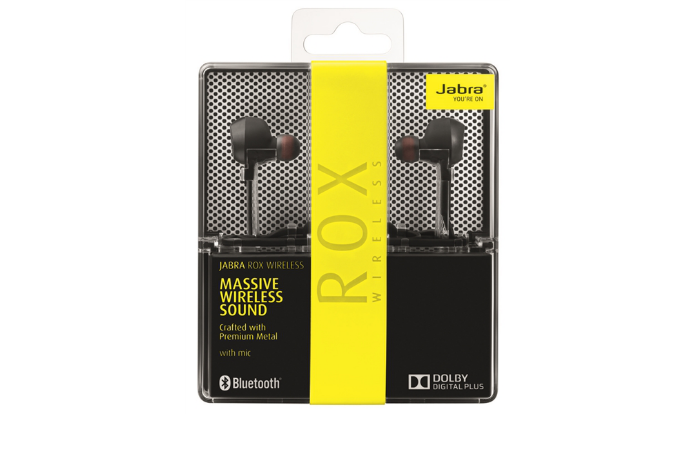 Back when I discovered the Jabra Stone, it was my first experience with a bluetooth headset. And yet…it looked like a headset. Meaning I could walk down the street taking hands-free phone calls, and looking a crazy person talking to myself. (I kind of always liked that.) Now that multi-purpose earphones are here, for both phone calls and entertainment, Jabra has entered the game with the new Jabra ROX wireless earbuds which I’ve had a chance to review, and I have a few thoughts about them.

I first got a demo of them at CES 2014 earlier this year and the sound is crisp and clear as I remember it. The Bluetooth set-up is so easy, anyone could do it. Seriously. The headphone protection seems to be carefully designed for active use, so short of dropping them in the pool you shouldn’t have to worry about ruining them if you get sweaty at the gym.

They claim to get up to 5.5 hours of talk time or 6 hours for listening time which isn’t as much as some headphones, so it depends how much you plan on using them between recharges. I’d say they’re more for the occasional phone call while you’re already on the treadmill, as opposed to all-day conference calling at work.

One huge innovation is in the power-saving magnets; stick the earpieces together around your neck, and the magnets activate a power-saving mode to keep the battery from draining.  It’s very cool. There are some mixed reviews about how strong the magnets are, but I haven’t had any major issues while wearing them, or plopping them on my desk. Just don’t count on them staying together if you toss them in your bag.

As for the challenges–well, there are quite a few for me. While the Jabra Rox comes with three different sizes of earbud gels, I will say even the smallest felt tight and somewhat uncomfortable in my delicate, ladylike ear canals. They are prone to falling out even when I’m just sitting around which means I need to add the included over-ear hook, which I never like using.

In checking other reviews around the web, it seems it’s not my ear size at all, because even dudes are saying they don’t stay in well. I’m hoping this gets fixed soon, because if an earbud doesn’t stay in your ear, it pretty much doesn’t matter what kind of other features it offers at all.

Separately, the headphones are designed so you can listen to music through the free Jabra Sound app (iOS and Android), which is all about bringing Dolby digital sound to the music and YouTube videos you tend to play on your device. (The David After Dentist video has never sounded better, ha.) The app automatically imports your owned music into a decent enough interface that sorts by album, artist, genre and song, then optimizes for the Jabra headset you’re wearing. You can listen with any headphones really, but it’s definitely optimized for their own.

The Dolby sound and virtual surround sound are admittedly pretty amazing; you should hear the difference right away. Which is why you might consider using the Jawbone app for your owned music (nothing streaming…yet) instead of  listening right through iTunes. Bonus: there’s a terrific equalizer with precision presets for all kinds of music and audio, or the ability to program your own settings.

On the downside, no streaming, as I said, which is so much of how I listen to music these days. And my biggest complaint is that for some reason, the Bluetooth creates an audio time delay between the YouTube video you’re watching and the sound, which makes me nuts. It means there’s no way I can watch video using these headphones; so for now I’d definitely stick with these for phone calls and music.

There is a glorious ability that wireless affords me to pace my room during conference calls completely untethered, which is why I really hope Jabra can work out the kinks. There’s a lot going for the Jabra Rox, and they look great,  but there are enough issues that for $129, I’d hold off for the next version.

Find the Android and iOS compatible Jabra Rox wireless earbuds at the Apple Store, or learn more on the  Jabra website.