10 brutally honest Twitter tips for brands: How to pitch without driving everyone crazy. 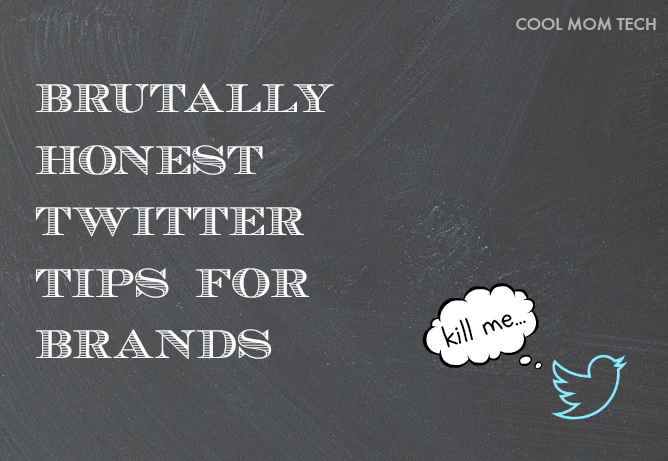 We spend a lot of time on Twitter. Maybe too much. But between our personal accounts, and @coolmomtech and @coolmompicks, all of us here definitely get to see our share of brand outreach. Not just to us directly, but to other folks on Twitter too. And the truth is, a lot of PR folks, brands, and small business owners could still use a little help with their technique. Or a lot.

Getting ignored is one thing; but you don’t want to inadvertently offend the very people you’re pitching. Or worse, be reported for spam and lose your entire account.

If you’re using Twitter to try and promote something, or to reach out to influencers in some way, here are some frank tips that we really hope will help make Twitter more fun and useful for everyone.

1. Twitter is a conversation. Join in naturally.
Think of Twitter like a cocktail party–some people are there to chat with friends, some are there to network, some are there to gossip about reality TV, some are just there to crack jokes. If you figure out who you’re addressing and why they’re on Twitter in the first place, you’ll have a better idea of how to reach out. As in, don’t ask Stephen Colbert if he wouldn’t mind reviewing your new hand mixer.

2. Learn the rules before you engage.
It should go without saying, for any social medium, that you should figure out the landscape first. Learn the acronyms. Don’t use all-caps. Know that breaking up your #sentences with #irrelevant #hashtags every #other #word is generally super annoying. Essentially, you don’t want to seem like the great-grandpa picking up the wrong end of the phone and yelling, IS THIS THING ON?

Also, don’t tag yourself. For example, if you’re @JoesAutoParts, don’t tweet Hey, big sale today at @JoesAutoParts until midnight! #JoesAutoParts. It’s redundant – we can already see that the tweet comes from you, and it looks amateur. (No offense if there’s a real @JoesAutoParts out there. If so, we’re sure you’re already super pro at this.)

3. Don’t publicly tweet someone you don’t know with a request.
We’ve found that tweeting Hey @KristenBell! Congrats on the new baby! You should check out our #diapercakes! is generally not that effective. Sometimes it is…but usually not.

Whether it’s asking for a product review, fixing a typo in a post, or asking for a meeting, this tactic is little like yelling out a request to one person across a room in a crowded cocktail party. It can put that person on the spot and make her feel uncomfortable, which generally isn’t a great way to start a relationship. It’s better to find contact info and an email address. And if they don’t make that easy to find? Maybe they don’t want to be contacted about stuff in the first place.

4. If someone doesn’t reply to you, don’t take it personally. Or call him out publicly.
Everyone uses Twitter differently, and someone who doesn’t respond to you may just be really busy. Or get a lot of requests in a day. Or may have automated all his tweets and didn’t see any of his replies that day. Or is there to entertain, not converse. There’s all kinds of reasons. Or maybe…he’s just not that into you?

Hint: Try email instead before you give up. Really.

Unless those people are actually in the book, a tweet like that is called spam and you can (and probably will) be reported for it. Besides, top influencers don’t want to cover news when it looks like you’re pitching it to the entire universe at once. It makes it less newsworthy.

That’s also spam, and it makes it much easier for Twitter to suspend you. Plus, it looks kind of desperate if someone clicks over to your feed to see what you’re all about. They’ll probably come to the conclusion that what you’re all about, is spam. And you’re not! Let’s fix that.

7. Don’t hijack a hashtag to self-promote.
If you notice tweets about a conference where your target audience is, for example, don’t just start randomly promoting your product with #blogher14 or #smweek at the end. Yes, you’ll reach the people following that hashtag, but you’re interrupting a conversation about something that’s, in all likelihood, not about you. Instead, use that hashtag to retweet quotes you like, ask legitimate questions, and engage authentically.

8. Think twice before setting up auto-DMs
If someone follows you, and you respond with a personally written direct message that says “thanks for the follow, I’m really a fan of your site/brand/recipes/YouTube channel,” that’s nice. If you auto DM with yet another request of the follower–follow me on Facebook, visit my blog, buy my book, check out our sale, subscribe to our newsletter–we know a lot of folks on Twitter for whom that’s an automatic unfollow. It’s extremely polarizing, and personally we’re not fans. Can’t we date a little before we get committal?

9. Ask for retweets incredibly judiciously
Even though that big launch of your new Cheeseless Cheeseburgers™ is the biggest thing that’s ever happened to your company, it is not the most important thing in most people’s day. (Save for perhaps lactose-intolerant carnivores and your own CEO.) Generally hold your “please RT” requests for something really important and urgent, like a public service message or global civil unrest.

(Speaking of which, the ™s and ®s in tweets? Don’t do that. You might as well write THIS IS A COMMERCIAL MESSAGE VETTED BY OUR LEGAL DEPARTMENT and no one wants to read that. Except the legal department.)

10. Don’t ask for a follow. Just be someone worth following.
Most importantly, look at your own Twitter stream: Is it interesting? Engaging? Funny? Thoughtful? Informative? Whatever you’re going for, step back and ask yourself, “would I follow me if I were my intended audience?” If so, you’re on the right track! And if someone doesn’t follow you right away, keep engaging. If you’re awesome and fun and relevant to them, they’ll get to it eventually.

Or , you could just be Justin Bieber. That seems to work for him.