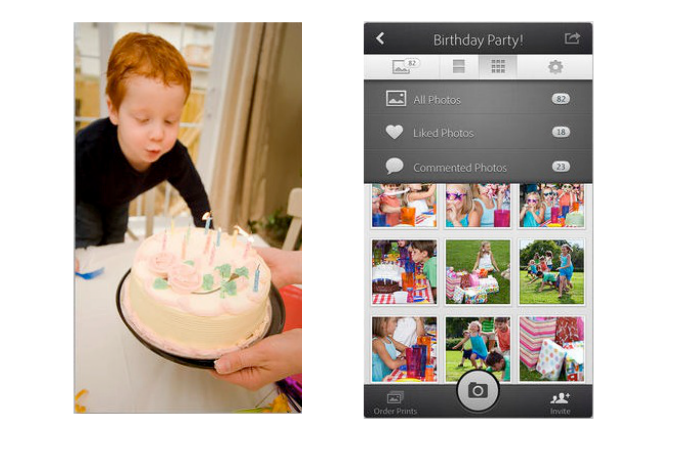 With all the photos we take at kids’ parties, sports events, vacations, and this week, Mother’s Day celebrations, I’m so glad to have found Adobe’s brand new GroupPix app , which lets you round-up, store, and share everyone’s photos with as much (or as limited) privacy as you want.

Say you’re at your annual Mother’s Day brunch or holiday gathering. Back in the day, you might have handed out those disposable cameras to everyone, then processed them all yourselves. But now, you just ask everyone with a smartphone to download the app, so you can all dump your pics into the same album. That way, every unforgettable (and let’s-just-forget-this) moment is preserved.

You can add photos you’ve snapped right from the app, or upload pics from your existing roll just like you do in Instagram. Just tap on the camera icon, select you phone’s library, choose which images you want to add to the album and you’re set. You can even add multiple images at a time, which is such a lifesaver.

Once an image pops up in the album, anyone in the group with the app may add comments or “likes” to it, share it to Facebook or save the photo to her own camera roll — even if she didn’t snap the pic herself. Photos can be added after the event is over, too, and you can print them directly from the app to any of the 8,000 U.S. Walgreens which is pretty cool. They’ll even ship to you.

Alternatively you can download the photos yourself and print anywhere. It’s an improvement over some photo sharing apps that force you to print only through their own service.

As for me, I take a lot of photos of my kid. And by a lot I mean the boy started treating me like paparazzi about two years ago — and he’s only 5. No more pictures today, lady! But since I have a personal No Social Media policy about posting pics of him, this app is perfect for me, so I can share with the family privately.

I’m also reassured that the owner of the album controls who’s in and who’s out, plus she can create settings for people without the app on their phones, like say older grandparents without smartphones. That way they can view the gallery and download the pics from a browser. So, with Adobe GroupPix, you’ve got all sorts of great  shots of mom, a bride and groom, a baby’s first birthday,  or maybe yourself, that you might have missed, and you can share them with whomever you want, without having to post them publicly. Or worse, deal with all the emails with 400 photo attachments sent right to you. I definitely won’t be missing those.

The GroupPix app is available for free download on iTunes or on Google Play for Android users.  It’s compatible with iPhone, iPad, iPad Touch, and Android devices, but seems to work best on smart phones rather than tablets.