MYBELL is more than a high-tech bike bell, it’s a life saver. 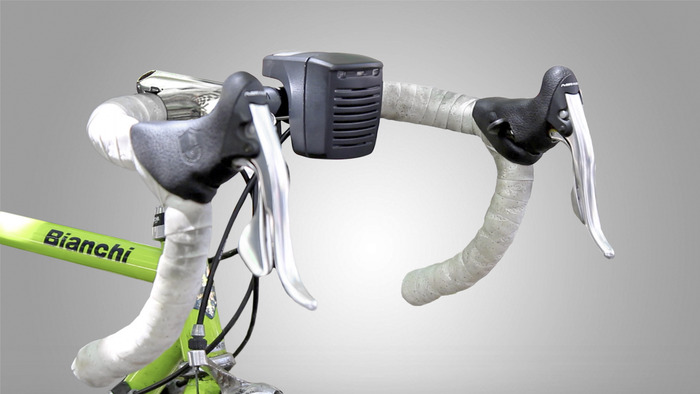 I may be a fairly serious cyclist, but there are still times when I wish I had a bike bell. (Like when I’m dodging toddlers on ride-on toys on the bike trail. True story.) The new MYBELL bike accessory is one bell I’d be willing to put on my super sweet road bike — and my kids’ bikes too — in part because it’s hardly a bell at all.

MYBELL, now a Kickstarter campaign, has already won tons of design awards and is en route to becoming a brilliant high-tech solution for cyclists. The main idea is that it allows you upload two separate audio files via USB and tap a big button on top to easily play them as warning sounds when you ride. I’d probably choose one sound that’s fun and friendly (and won’t scare little old ladies), and one sound that’s loud and booming to get the attention of packs of giggling tweens. Or on tough climbs where I don’t have enough breath to shout “On your left!” especially with a decibel level that hits 96.

Of course if my kids were to use it, I’d need to exercise veto power over the audio files they put on their  own MYBELL, so that I won’t get too many complaints from the neighbors.

MYBELL is also designed with super bright LED lights, which come in handy at dawn and dusk of course, but also while riding through tunnels and if you get caught in the rain. The smart part is you can customize that aspect too in terms of color and flashing style, the idea being that bikers know their needs best, and it will differ whether you’re cruising around Manhattan on a rented Citibike, or training for an Ironman. And it fits on any bike or even scooter. Very smart.

Now I wouldn’t leave MYBELL on my bike during a race, primarily because it’s heavy by road bike standards (8 ounces), but I’d definitely use it while training. For kids and casual to moderate adult cyclists, I can see it being a permanent fixture for safety’s sake and a huge success.

Oh, and for entertainment too. I’m already giggling at the idea of using a clip of “Fat Bottomed Girls” for my fun and friendly sound.

Get your chance to preorder the MYBELL customized digital bike bell for a $99 contribution or $119 for one of the cool colors with an estimated ship date of 2/15. The Kickstarter campaign expires August 1.