Razor Deluxe Crazy Cart: This is not your father’s Big Wheel 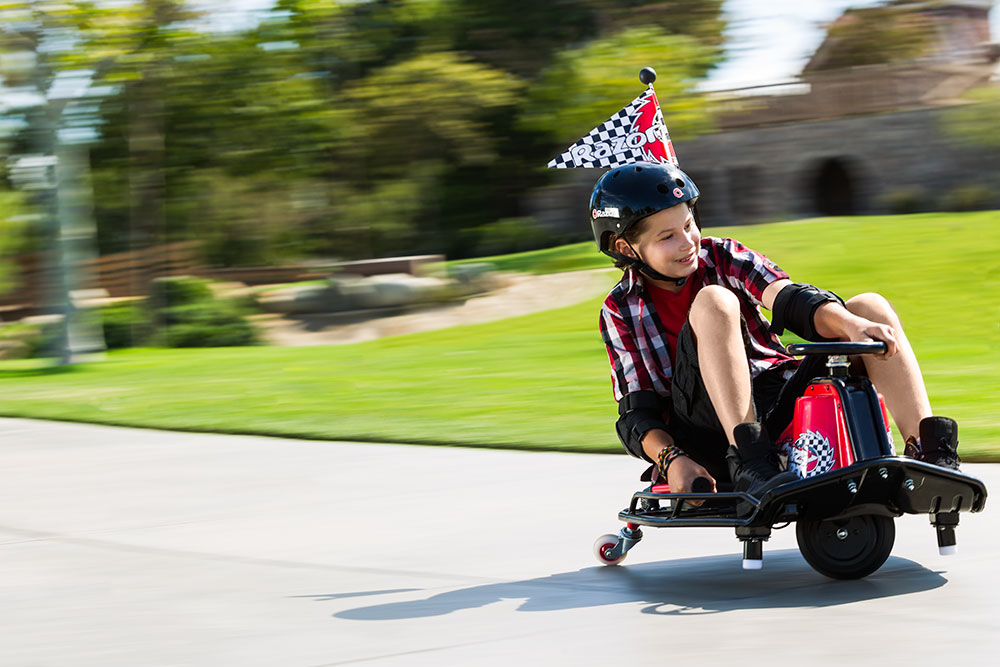 If you’re looking for the spendy kids’ holiday gift of the season (and I know, I can’t believe I’m thinking about this already either) I think I’ve found it in the new Razor Deluxe Crazy Cart ride-on car. I spent a few minutes tearing through a tech press show on one and if I had had the ability to drive it out the door, down the stairs, and onto the subway home, I totally would have.

From the same folks who make the ubiquitous Razor scooters, the Deluxe Crazy Cart is an update from last year original Crazy Cart (with a higher price tag to match) and is a fabulous option for the proverbial kid-who-has-everything, who has also outgrown ride-on toys.

You can actually do up to 12 MPH which is more of a clip than you might think. But even at the higher speeds, I found it fairly easy to operate and steer. Kids may actually do better considering their knees won’t be up to their chests like mine. There are two levers that let you alternate between Go Cart and Crazy Cart mode, and while you accelerate with a foot pedal, be aware that there’s no brake. Just slowing down, or drifting when you lift the lever. And ooh, is that fun.

The age reco is 8 to 11, with a 140-pound weight limit, but I’d have the younger kids stick with wide, paved driveways or safe private roads with plenty of room until they get the hang of it. As for those of us parents under 140-pounds? Get ready to steal your kids’ toys.

Note to self: Next time, try it when you’re not wearing a skirt.

The two 12V batteries promise up to 40 minutes drive time between recharges which isn’t a lot, especially if you have two or more kids fighting over whose turn it is. As far as the other complaints I’ve seen, a lot seem to be from people doing things you’re not supposed to do with it (i.e. ride it down the stairs and into the subway). Keep in mind, it’s not an actual car; it’s a toy car. You know. For kids.

Then again, there’s always the Razor Crazy Cart XL designed specifically for those of us over 16 (or still 16 at heart), which is slated to ship in early December. It goes up to 17 MPH ,and hallelujah, it handles riders up to 240 pounds. So if you your or significant other decide you can’t live without your very own, $799 takes care of that for you.

Find the new Razor Deluxe Crazy Cart ride-on car exclusively at Toys R Us where you’ll want to take advantage of the free $49+ shipping – the cart weighs in at more than 70 pounds.

We’ve got more tech toy recommendations in our archives.