Minecraft launches the first girl character. And she’s just as handy with a pickaxe or a bucket of lava. 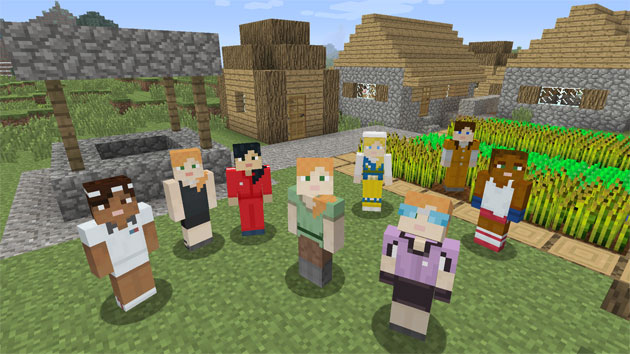 My girls are obsessed with Minecraft. As in, Marble Jar-level obsessed. And yet, for some reason, Mojang hasn’t quite embraced the girls who have embraced Minecraft with any female characters. Until now. Tomorrow, they’re rolling out Alex, the first female Minecraft character who actually looks vaguely female considering the 8-bit animation. Or at least she doesn’t look like like a Steve skin, only with long hair.

Alex doesn’t “have eyelashes” which my daughter noticed at a very early age was what defined female animals on cartoons. But she does have reddish hair, which is kind of like her favorite Harry Potter character, Ginny Weasley, so she’s thrilled.  But besides her slightly more slender arms, she looks pretty much the same as every other character, so fear not, moms who hate the now curvy figures of new and not-entirely improved cartoon characters of your own youth.

Alex is going to be a free option on all gaming consoles (PS and Xbox) as of tomorrow, and come summer, she’ll be on the updated Minecraft PE — this parent’s Minecraft portal of choice.

I’m really happy that it makes my girls so happy. My second-grader has a polka-dot house totally made of mushrooms with a sheep farm out back, while my fourth-grader created her own Amazing Race obstacle course;  I sense Alex will fit perfectly into both. That is, when she’s not slaughtering hostile mobs with a diamond sword.

Check out a little info about Alex, the first female Minecraft character, on the Mojang blog