The Lily Camera is the first throw-and-shoot drone. Whoa. 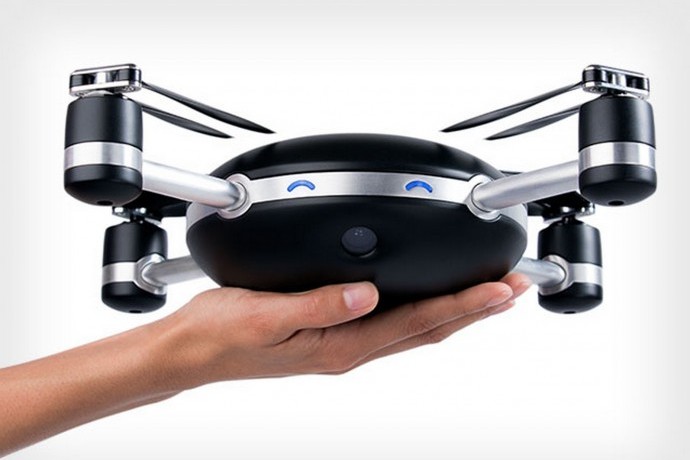 We’ve seen a lot of cameras around here, and we’ve tested them out under some pretty extreme conditions. (Ask Kristen and me about our kayaking adventure at the GoPro Mountain Games sometime.) But we were all blown away when we learned about the Lily Camera, which is the first, well, throw-and-shoot video camera drone.

The Lily Camera really is simple: No assembly required, just charge her battery, pop Lily’s tracking device in your pocket — or in the waterproof wrist case, if you’re in the water — toss her in the air, and take off. Lily automatically follows you using GPS, keeping you in her sights and shooting video in various ways as you go.

You control the camera (not the flying) from the companion app, and the results aren’t too shabby either: Lily can shoot 1080p video at 60 fps, or 720p video at 120 fps, with an impressive 12MP photo resolution if you’re shooting stills.

Compare that with 8MP resolution for your iPhone 6, as an indicator of the quality. Check out the video and you’ll be as blown away as we are.

As with pretty much all drones, don’t expect to shoot hours of video all at once. You’ll get about 20 minutes of flight time, and it takes about another two hours to recharge. Compare that with the popular Parrot AR Drone 2.0 (at our affiliate Amazon) which lasts only 10-12 minutes on its original battery by most reports, and charges in about 1.5 hours.

In other words, while the flying and shooting time is pretty good, if you expect to capture yourself landing a wicked jump or riding the perfect wave to shore, make sure you’re ready to nail it before tossing Lily in the air.

Lily hovers at least five feet overhead, and I like that the sensors help keep collision danger at bay — not that I would take mine skiing through the trees or near any low power lines. And while the Lily is waterproof, you’ll need to be ready to fish it out should it sink more than a few feet or so. But how fun would it be to capture your child’s first leap off the diving board, or her first successful ride without training wheels this way?

While Lily isn’t cheap (surprise!) we’re all super impressed by Lily’s pre-sale price of $499. It’s a great deal relative to other drones. Even the anticipated future retail price of $999 is less than other high-end drones without cameras though I’d snatch up the half-price offer, now.

But what an awesome Father’s Day gift, right? Well, at least for next year since Lily doesn’t ship until February, 2016. I bet a lot of the dads I know would swoon over Lily, and not just because she’s cute. We moms would insist on taking her for a spin too, to say nothing of the kids. In other words, you may have a new 20-minute reward to incent your kids to clean up the front yard.

Learn more about the Lily Camera on their website, and place a pre-sale order by June 15 to score the $499 price. Product starts shipping in February, 2016.