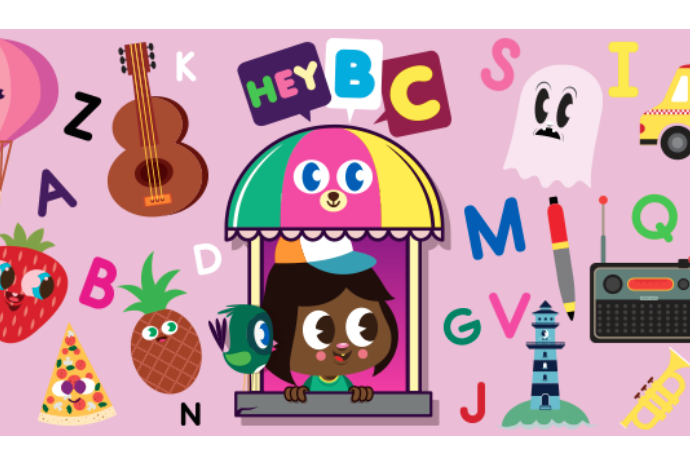 My kids have been back to school for a couple weeks now, and that means I’m reviewing spelling words with the big kids while I cook dinner every night. My preschooler doesn’t want to be left out, so he’s asking for “homework” too. That’s where those educational apps on my iPad are coming in really handy. For spelling, we’re loving the new HeyBC spelling app from the very cool Belgian street artist Bué and Hey Hey apps. It’s so fun and colorful that my kids I’ve found my kids playing it on their own, not realizing that they’re (gasp!) learning. Which is fine by me.

Related: 10 of the best reading apps for young kids and early readers

The beauty of HeyBC is its simplicity. Digital flash cards with illustrated images, which are often animated, flip across the screen. Your kid drags-and-drops the letter tiles floating on the screen into the boxes below the image. Easy.

On the home page, you can enter one of three levels, ranked according to difficulty. Basically the difference is that on the 1-star level, you may just need to fill in 1 or 2 letters. By the time you get to level 3, you have to figure out all the letters yourself.

One thing that sets it apart from some of the others I’ve seen, is that it has some of the blended sounds appear together in one box. So, the word fish might be just three boxes: F, I, and SH. This shows beginning readers how those sounds work together, which is a big help in learning to understand phonics.

And should you master the 100 English words quickly, you can also learn them in Spanish, Dutch, French and a handful of other languages.

Many of the words I’m seeing in the app are also the ones coming home my 2nd grader’s spelling lists, which makes me wish Hey Hey would add a feature where parents could customize the word cards their kids work on. I’ll keep my fingers crossed they’ll do that in their first update.

Find the HeyBC app for $2.99 for iOS or Android, and start practicing your spelling today.