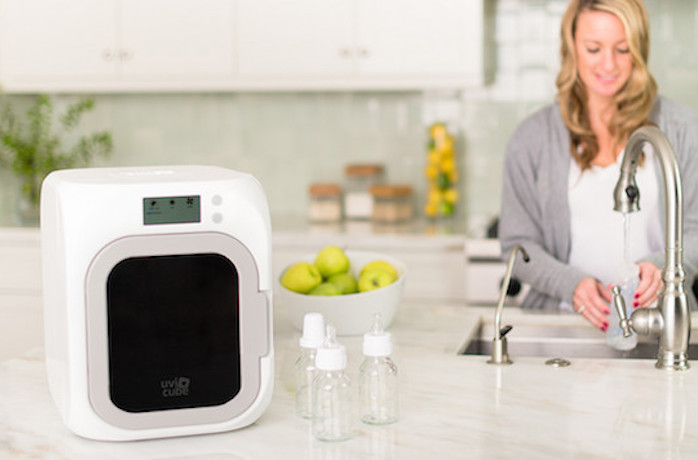 It’s officially winter, as Jonas has let us know oh-so-subtly this past weekend. And since everyone in my house also has some form of a winter cold, I’m officially over the germs that go along with the cold weather. So while we’re stuck inside, I’ve been making the most of this opportunity to sterilize everything in sight — from door knobs and toothbrushes to remote controls and. And for those of you who have an infant at home you’re probably adding sterilize baby bottles to that list, in which case the UviCube UV light sanitizer can help.

To be clear, we are really not all germaphobes around here. In fact, we’ve received a lot of pitches for baby bottle sanitizers over the years, and to be honest, they pretty much don’t make the cut for us. Soap and water has always worked just fine, when you have fussy baby who needs to eat we can’t quite imagine taking the time to sanitize the bottle first.

But when I saw the UviCube, which is so different than others we’ve seen, I was definitely interested in giving it a try. Its design and size — mamas, it’s big, like the kind of thing you see in a nail salon — it can sanitize much more than just baby bottles, which to me makes it worth a better look than single-use sterilizers that you’ll outgrow in a few months.

The UviCube is made to dry, store, then sterilize items by emitting UV-C rays from a low heat light, which break down the molecular bonds in bacteria, effectively killing them. To get technical, it’s lined with reflective mirrors, so the UV-C light bounces around and gets all the angles of whatever it is that you’re cleaning. And that includes items with salmonella, e-coli…just don’t read too many germ articles if this is the kind of thing that freaks you out, trust me.

However what I especially like about the UviCube that you can use it to clean phones, remote controls, toys, house keys, nail clippers, toothbrushes — pretty much anything that gets handled with sticky hands, or popped into drooly baby mouths. Even if they’re moisture-sensitive, like your tech devices. That gives it far more longevity than regular bottle sterilizers.

I mean, you worry about germs now? Wait until your kids are old enough to hit the video game remote control stage. And yes, they still put those in their mouths.

Now I know some of you are wondering whether UV sterilization is all just mumbo jumbo, and I kind of did too. Especially since I can’t visibly see any difference once an item is clean. Just know that hospitals, laboratories and water treatment plants use this exact same process, and I feel confident looking at the third-party lab results that the UviCube has  made available.

There’s one big downside, though. Literally. The UviCube is huge. Like, really massive. My kids thought it was a microwave.

Ultimately, I’d only recommend sacrificing the counter space and cash if you’re family is going through the phase of endless bottles and kids always putting things in their mouths. Or, if you have some specific health concerns and could really benefit from making sure particular items are germ-free at home.

Or hey, maybe you have a expansive, magazine-ready designed kitchen and space and money is not issues. But for most of us, counter space might be a higher priority and we’ll just stick with the old-fashioned, not-so-high-tech soap and water that comes out of the regular, not-so- high-tech faucet for most items.

You can find the UviCube at their website or our affiliate Amazon. Thanks to the company for sending CMT a trial unit for review consideration.