Can I edit my tweets? You ask, Twitter finally says YES. Bring out the confetti! 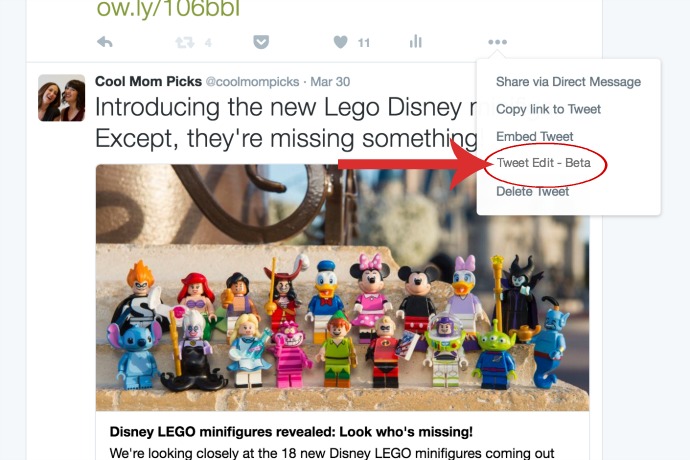 We cannot tell you how many of our readers and Twitter followers ask if you can edit tweets. And if you spend any time on the network at all, you’ve probably seen those requests pop up too. So at long last –hooray! — Twitter is rolling out Tweet Edit this week.

Just announced yesterday, we’re so glad to hear that they’re finally listening to what users want. (And that includes not raising the character limit to 10,000 which was officially confirmed as well.)

Tweet Edit is starting as a beta launch for a few select verified accounts (we were lucky to get to try it via our Cool Mom Picks Twitter account), but by the end of the month it will be rolling out to the masses, and all users should have access via web, or when you update your app.

Here’s how it will work:

1. Click the 3 dots at bottom right, which brings down the dropdown menu of share/edit options.

2. Look to see if you have “Tweet Edit – Beta” available to you.

Note: If so, you need to do this within 30 seconds after publishing. (Important!) In fact the demo of this was pretty hilarious, complete with a countdown clock. But the 30 seconds are up, you’re stuck with what you have (or the option to Delete Tweet as always) and “Tweet Edit” will be greyed out as an option.

It’s so simple! And considering you have the ability to edit Instagram posts, Pinterest pins and Facebook comments and updates, the only strange thing about it is just how long it took Twitter to finally give users this feature.

Related: The pros and cons of Facebook Reveal. Do you want to know who’s been looking at your profile?

Now, there is one big limitation: You have just 30 seconds to edit your tweet after sending, which is similar to the 15 second window in the Gmail Unsend feature we’re all such fans of. So don’t get excited to be able to go back and tweak that time you wrote your instead of you’re on a popular tweet last month (d’oh, we’ve been there too) or realize you used between instead of among (sorry, grammar nerd stuff).

Also, note that you can only edit the text of your tweet, before hitting publish again. That means if you decide you want to add a photo or video to your tweet or delete one, you won’t be able to do that.

Finally, this feature will only be available on Twitter.com for web and on the official app, so for those of you, like us, who use third party management systems like Hootsuite, you’re going to want to keep that open when you work.

We think it’s all a very smart move on Twitter’s part, because with all the talk about people abandoning Twitter for other social networks, this might be a small way to bring people back again and keep Twitter relevant.

Plus, it’s always nice to know that the folks behind a social network, app, or any platform at all are listening to what users want. Hey powers-that-be at Pinterest, take a note!