If Tim Burton created an app, Sir Benfro’s Brilliant Balloon would be it. 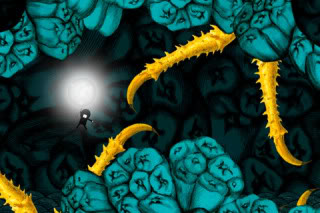 While Tim Burton has yet to get into app development, I’m pretty sure if he did it would be this one. Light Emitting Daves, Timorous Fizzles, mustachioed Brackle McSturdys, and Eggbutt Snaffles sound like things sprung from a beautifully eccentric mind, and they’re all channeled into an app called Sir Benfro’s Brilliant Balloon.

Overall, the idea of the game is simple: Keep Sir Benfro–an explorer, naturalist and be-fro’ed beatnik-type outfitted in black–afloat as he dangles by a balloon string through four different environments filled with some seriously crazy creatures.

Collecting magical fireflies (the aforementioned Light Emitting Daves) powers his balloon and helps keep him airborne. Run out of them, and the game is over. Make it through an entire environment unharmed by critters and environment edges, and you’ll unlock a new adventure.

Things can get a little tricky from the get-go though, especially for younger players; my five year-old can’t play this one alone. And unlike most apps, this one doesn’t allow for dragging and flicking in order to move Sir Benfro around. Instead, kids have to tap and press at various speeds in order to keep him moving. Pop-ups with additional instructions are helpful, but only for advanced readers.

That said, it’s worth muddling through just for the illustrations. Shadowy pencil drawings of things completely fantastical make the whole app feel like a storybook you just can’t put down. A Spotter’s Guide gives kids a closer look at the strange beast that block Sir Benfro’s path throughout the game, too, with long, hilarious descriptions to go with them.

The soundtrack is nifty by the way. So nifty in fact, that it’ll get stuck in your head for at least a week. Just saying. –Pilar

Download Sir Benfro’s Brilliant Balloon. for iPhone and iPad for $0.99 on iTunes and learn more about it at SirBenfro.com.