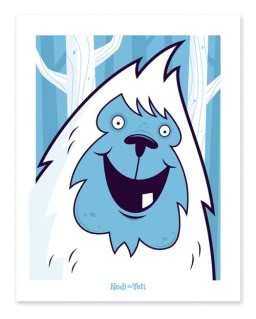 Bigfoot. Sasquatch. Bumble. And now, Nedi. As in, Nedi the Yeti. He’s friendly, furry, likes hide and seek, and stars in an app for kids ages two and up.

Designed especially for the iPad in HD (that’s fancy talk for really sharp resolution), the semi-interactive Nedi the Yeti storybook is meant to be co-read with a parent, since tilt action reveals Nedi’s equally smiley friends–polar bears, an owl, a fox and others–as they peek out from behind glaciers and trees and other outdoorsy places.

Unfortunately tilting didn’t work on my iPad, at least not the way it sounds like it should have for this app, but dragging accomplished the same effect, and was much easier for everyone involved. Also I found that touching the found characters results in mismatched sound effects–the real hoot for the owl was a cartoony boingy noise meant for the rabbit–a bit of a bummer since the illustrations are pretty cool. I’m hoping that will be fixed quickly with the next upgrade.

The concept really is charming though for preschoolers, and the page turning sound on each frame is a nice touch. Hey, if you’re going to bill your app as a storybook, you might as well sound like the real deal. -Pilar