A is for amazing adorable animal alphabet app from Wee Society 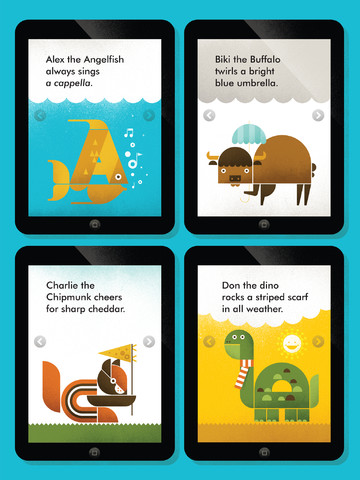 Impalas deep sea diving, vultures with beehive hairdos, sneezing squirrels–they’re all part of a new crazy clever alphabet app with illustrations so quirky and modern that I want to hang them on my kiddo’s wall. But even better, this app isn’t just a bunch of pretty pictures. It’s amazingly educational too.

Created by CMP favorite Wee Society, the Wee Alphas app acts as an interactive book, introducing preschoolers to letters, animals, animation and silly one-sentence poems. And, since each letter is hidden within an animal, this is probably an app best played with a parent until little learners get the hang of tapping on it to activate the illustration.

After cycling through all the letters, kids are encouraged to choose their own “special letter” (it could be a favorite or the letter their name starts with) and trace it. And, since no time limits or error warnings are in place, they can take as long as they like.

What I really like about Wee Alphas is that it doesn’t concentrate solely on phonics and common letter sounds, though this might confuse some kids since “Jose” and “jellyfish” have two completely different sounds yet are presented together. Since the app does encourage kids to trace with a finger or a toe, watch out for the over eager kiddos who will want to step on your iPad. Eep!

It’s got a slew of super practical parts, though, teaching all sorts of really helpful skills, like letter recognition, complex vocabulary, and fine motor development, just to name a few. And it gives younger kids a chance to see that learning basics doesn’t have to be boring. You just can’t beat a fox doing film critiques. -Pilar

Download the Wee Alphas app for iPad on iTunes for $2.99.

If you like this, be sure to check out Wee Alphas personalized prints.