InfiniScroll gets kids creating their own stories. Awesome stories. 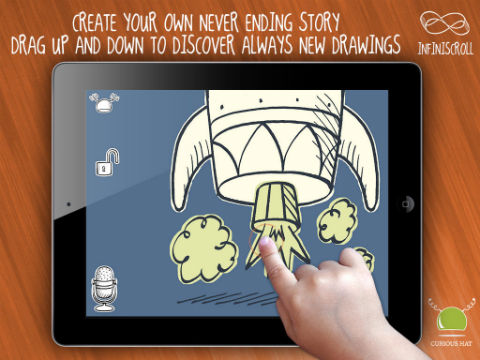 Rules are all well and good, but sometimes it’s fun to break them. This outstanding storytelling app agrees, but shhh…don’t tell the kids.

InfiniScroll, an open-ended storytelling tool turned app for iOS, is all about breaking the rules of linear storytelling. Though it’s designed to be used by parents and kids together, your kids will be able to handle playing around with it themselves after the first try.

The app works by scrolling up and down (which initially feels a little awkward but you’ll get used to it) to reveal a collection of offbeat illustrations ready to spur some great yarn-spinning from those fertile imaginations.

Kids can “lock” the drawings they like most and then get ready to record a story around them. Just know that the app explains that no image is repeated twice, but this is only partially true because when I scrolled through, many of the same illustrations were just scrambled into new configurations. Not that that’s a huge deal.

The best part is the microphone feature. Kids can tap it to record their own made up story in their own voice–or yours or Grandpa’s or whoever they want to capture–then save it on your device’s camera roll as an image or video. Then they can share with the world, of course.

The bottom line is that it’s quirky and random and fun, and helps jump start the storytelling capabilities of creative and less-creative kids alike. I think it’s definitely worth the $3.99. Also because there are no in-app purchases, ads or direct links to other sites. And hey, thanks for that on behalf of lots of parents.  –Pilar

Download InfiniScroll for iPhone and iPad on iTunes for $3.99.