WonderBox: A game-changer in educational apps for kids 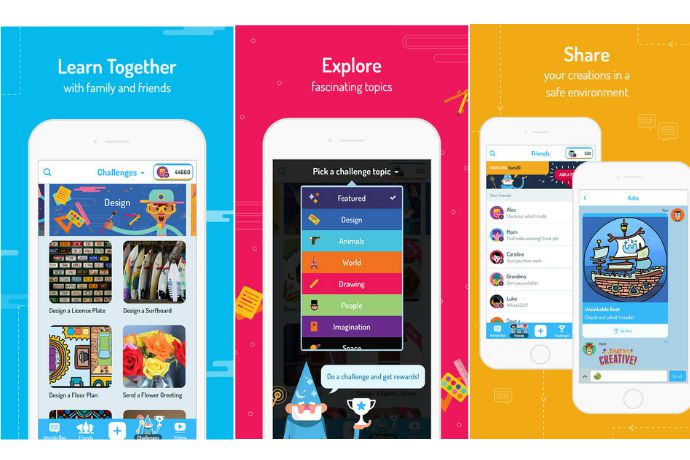 I have a kid who really wants to be creative, but usually needs a good push before he’ll dive into a project, and now we’ve found an app that delivers on that so beautifully. The brand new WonderBox app hails from Duck Duck Moose, one of the first educational app developers we really fell in love with, so no surprise this one is another winner, whether you’re a homeschooling parent or just looking to get your kids excited about learning through technology.

The app contains 3,000 fascinating, really well-curated educational videos around topics like science, riddles, DIY, sports, the world, or people. Then there’s a section featuring dozens of challenges and creative prompts that let kids use their own imaginations and natural curiosity to bring the subjects to life whether it’s designing a treehouse, building a bike (see ours below!) or even putting away the iPad altogether to head to the kitchen and create a cool science experiment.

We happen  to be obsessed with the video featuring an octopus escaping from a jar with a tight lid on it, as a demonstration of how they use their tentacles’ suction. But you’ll find all kinds of subjects that will excite your middle-graders or tweens, from J.K. Rowling to hieroglyphics.

I think that parents will love that there are no (I repeat, no) in-app purchases, although it may not seem that way. Each user starts off with 1,000 coins, and if you want to earn more, you earn them not by hitting your parents up for iTunes credits, but by watching the educational videos and participating in the challenges. Isn’t that cool? Then you can redeem coins for elements in their designs, like adding cool handlebars with a basket to a bike design.

It’s like gamifying creative thinking and problem solving the same way a terrific classroom teacher might do it — only in app form. In fact I wasn’t surprised to learn that every single challenge in WonderBox has been vetted by educators considering how thoughtful they are.

When your kids have finished their creations, they can share them with friends whose parents have added them to their own profile, using their unique “friend code.” And of course, they can also share to your own profile, which is linked to your email.

With that in mind, I’d suggest that you create some “rules” in your email account so that everything shared with you goes right into a folder without clogging your inbox. At least if you’ve got kids like mine who want to email everything they’ve ever created with me. Not that I blame them.

You can download Duck Duck Moose’s WonderBox app app for iPhone (coming soon for Android) for free. And there are no in-app purchases, which we think is really wonder-ful.